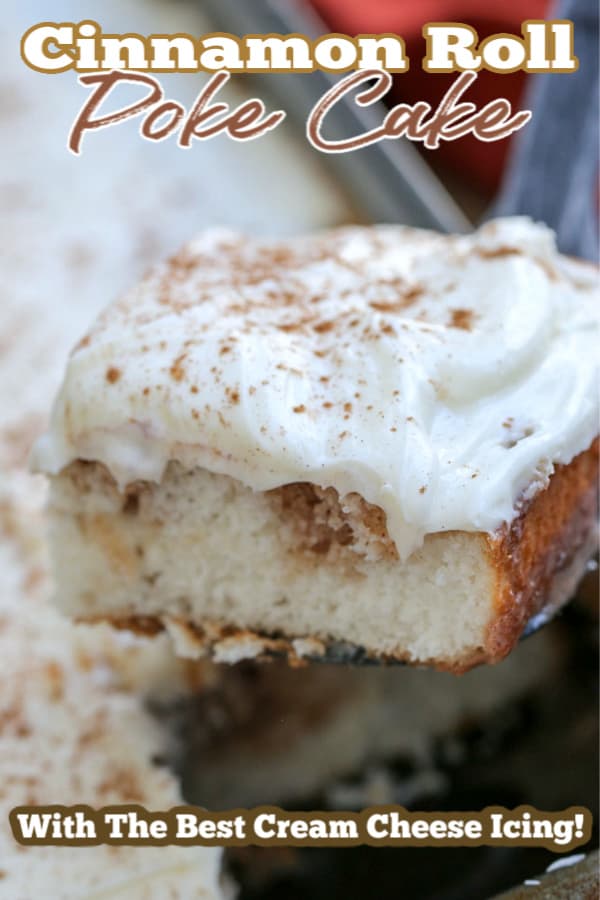 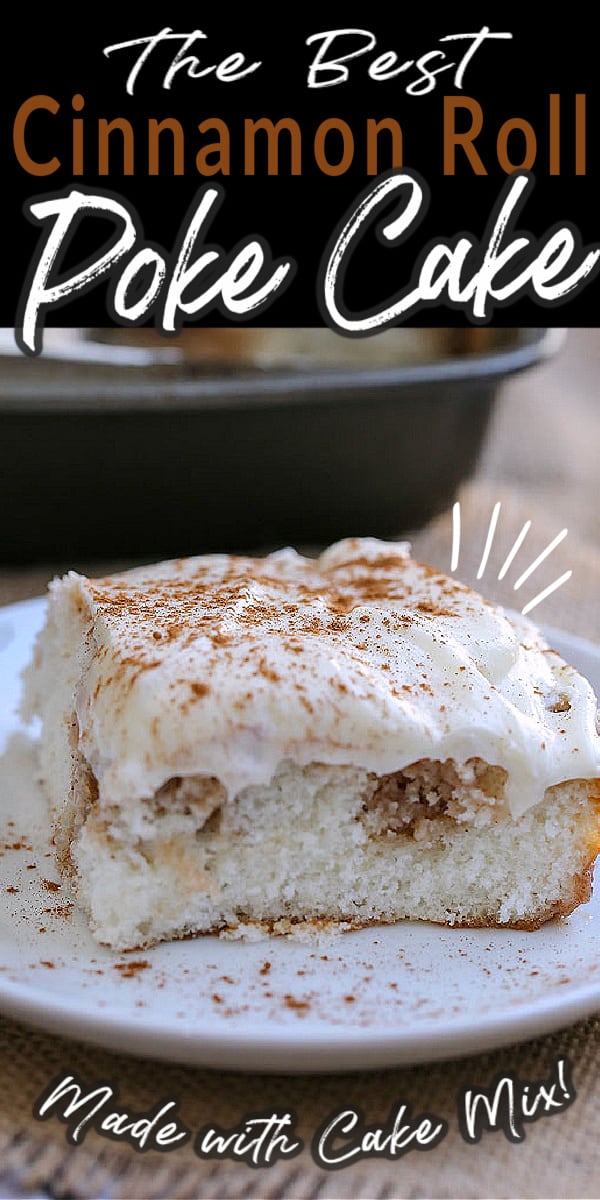 This Cinnamon Roll Poke Cake starts with a white cake mix, infused with a buttery cinnamon-sugar filling and topped with a rich cream cheese frosting! It takes just like cinnamon rolls.

I’ve learned that there’s one thing better than classic cake, and thats poke cake. This Strawberry Jello Poke Cake is perfect for summer, as is our fall favourite Pumpkin Spice Poke Cake.

One day I wanted to make a dessert, and was leaning toward our Rolo Poke Cake. Yet I was also madly craving cinnamon buns.

Just as I was about to pull out our recipe for Cinnamon Bun Cake, I had the brilliant idea of combining my favourite parts of these recipes into one.

Turns out it was the best decision, because I made a poke cake that was sinfully delicious.

This easy cinnamon roll poke cake has all of the flavors of a cinnamon roll but with less effort. It’s a fantastic addition to our easy cake recipes collection.

This cake recipe is incredibly moist, has a sweet cinnamon filling, and it melts in your mouth!

What is a Poke Cake?

Poke cakes are just cakes that have had holes poked in them, then filling or liquid is poured into those holes.

The reason poke cakes are so loved, is because extra flavor is infused throughout the fluffy cake. This way, each bite is incredible. Poke cakes make an incredibly tasty dessert.

Making this cinnamon poke cake recipe starts with baking a white cake from a box of cake mix. (combine cake mix with instructions and cook as per directions).

Sure, you can make your own, yet I’ve never been disappointed with doctoring a simple box cake mix, so you may as well save yourself some time in the kitchen.

You’ll need the following ingredients to make this cinnamon roll poke cake recipe, the filling, and the delicious frosting. The full recipe is below along with a printable recipe card.

After making the white cake (in a cake pan) according to the dry cake mix package directions, allow the cake to cool completely in the baking pan.

While the cake is cooling, get the delectable cinnamon roll filling ready by stirring together the icing ingredients together in a medium bowl.

You can do this with a hand mixer or a stand mixer with a paddle attachment, on medium speed. Combine until smooth, and set aside.

Pour batter (the filling mixture) into the holes. It doesn’t have to be precise, just try to move along from hole to hole. If there’s any remaining, I just dump in the middle and top of cake, and allow it to flow where it wants.

Next is the frosting for this cinnamon roll cake, and this one is a cream cheese based icing that I make when I need a stiffer icing than our Dream Whip Icing that isn’t too sweet. This homemade cream cheese frosting is similar to the one I use for our incredible Carrot Cake.

Use an electric mixer and cream together, and then spread the icing on the entire cake. Sprinkle the top of the cake with some ground cinnamon for added taste and look. Voila!

To Store: Place in an airtight container (or cover with aluminum foil) and keep at room temperature or in the fridge for 4 days.

This is the best cinnamon roll poke cake. It has all the taste of a cinnamon bun, yet without that heavy dough. Instead, it’s in the form of a light moist cake. It’s one epic poke cake!

This best cinnamon bun poke cake really is the perfect way to indulge your cinnamon roll craving. It has become one of our favorite desserts ever.

Moist cake, buttery cinnamon sugar filling and a delicious cream cheese frosting. When I think of perfect cake recipes, this one definitely comes to mind.