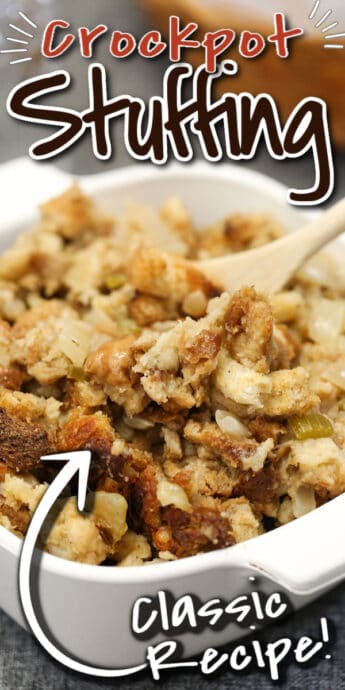 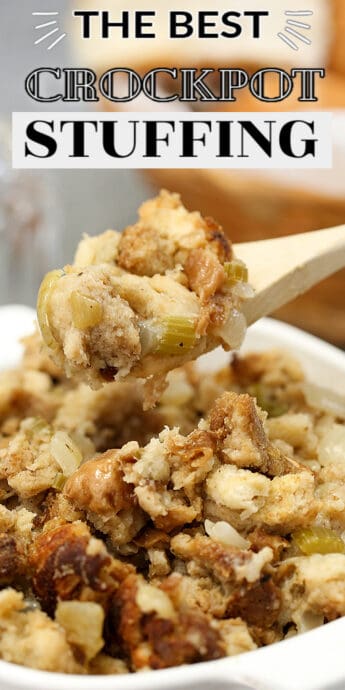 This Slow Cooker Stuffing recipe takes my Mom’s favourite classic stuffing recipe into an easy holiday side dish that frees up oven space. You’ll want to make this crockpot stuffing recipe for every thanksgiving dinner or Christmas season.

I love cooking huge meals primarily for the yummy side dishes.

Together they all give the comfort in a meal alongside turkey or a Brown Sugar Pineapple Ham.

I made this crockpot stuffing for thanksgiving day this year, and it was a huge hit.

Stuffing recipes like Chicken Stuffing Bake and Mashed Potato Stuffing Cakes are very much enjoyed in this home.

Sometimes my favorite part of the thanksgiving meal is leftovers and the great meals you can make later.

Sometimes I used Boxed Stuffing Recipes, yet not when ingredients and the special occasion allows.

Then, I break out my Mom’s stuffing recipe from her metal recipe box.

It’s been my go-to for so many years.

Sometimes though, when I get super crazy on the side dishes, valuable oven space doesn’t allow for yet another dish.

This is why I made stuffing in the slow cooker this year. And it turned out amazingly well.

The result is flavourful delicious stuffing that is moist {but not soggy}.

It also has those nice crisp pieces along the edge.

You know, those parts that everyone races for first. This is the best stuffing recipe ever!

So the outside pieces are similar to the stuffing you bake in the casserole dish, and the inside parts are much like the stuffing from inside the bird.

Once combined in a blend of the perfect fresh herbs? Perfection!

WHY SHOULD I COOK STUFFING IN A SLOW COOKER?

I made crockpot stuffing because I usually stuff the bird, and then have a separate dish baking in the oven.

Yet, there’s all that recent advise about not stuffing a turkey, and I didn’t have the oven space to spare to make my Southern Cornbread Dressing.

The prime real estate is the oven during a holiday meal like Thanksgiving or Christmas.

This means it would be super helpful if my stuffing were made elsewhere.

This is where our favourite convenient small appliance comes in.

Once again the slow cooker saved the day.

Plus, I could make this ahead of time and concentrate on other tasks all day, allowing the crockpot to work the magic all on its own.

HOW TO MAKE STUFFING IN THE SLOW COOKER

I only changed the cooking method only.

It’s a recipe near and dear to my heart, so I hope you enjoy this traditional stuffing recipes as much as we do.

It starts with stovetop cooking in a large skillet over medium heat.

You’ll want to soften the celery and saute onion in a bath of butter. It doesn’t take much time at all.

Then once the mixture has cooled; you mix with the dried bread cubes, seasoning, and the beaten eggs in a large bowl.

This is the part where the ‘cooled mixture’ is important as you don’t want to cook the eggs when they are combined.

Now, the amount of chicken stock you’ll add is an estimate only.

The actual amount you’ll want is dependant on the type of bread you’re using and how dry it is.

You want enough to moisten the bread mixture, but not make it soggy.

Which is why it’s added in bits, and re-assessed during slow cooking.

Through the day I sample the stuffing, to see if more spices or broth is needed.

You can always add more, but you can’t take it out.

But, if you find you did add too much, stir in more dried bread crumbs and that may salvage the recipe, but you will still have some parts still soggy.

So taste-test this slow cooker thanksgiving stuffing many times and adjust as needed.

This is my favourite excuse, because it’s delicious and ties me over well until dinner time.

I’m glad my kitchen was so organized chaos this year because it allowed me to transform my Mothers traditional recipe into an easy adaptation that fits with modern life.

This crock pot dressing recipe has freed me so much time and energy during the holiday season and especially for thanksgiving dinner.

CrockPot Stuffing will be a regular for our holiday meals such as thanksgiving and Christmas.

It’s easy and convenient – and a staple to any holiday meal and one of our best recipes.

Plus, it is so much better than the boxed stuff.

Don’t get me wrong though, they do come in handy.

Bookmark my Recipes Using Stuffing post. You might have leftovers from this recipe, so I’m here to help put them to good {yummy} use!

What pairs with Slow Cooker Stuffing?

This is a lovely side for so many meals. I suggest turkey, Rosemary Garlic Pork Roast and Pineapple Glazed Ham.

It’s a perfect thanksgiving side dish for Smoked Turkey and Roasted Brussels Sprouts with Almonds and Feta.

1. In a pan on the stove, heat the butter and add in the onions, celery and mushrooms until softened. Add in the pepper, salt and poultry seasoning and cook for 1 more minute.

2. Allow the mixture to cool. Then place the bread cubes in a large bowl and add the cooled mixture, along with the thyme, rosemary and parsley. Gently mix to combine.

3. Gently stir the eggs into the chicken broth and add in thel iquid 1/2 cup at a time and gently toss to combine. You might not need all the liquid now, but reserve for later if needed. Remember, add only enough to moisten, but not soak.

4. Add mixture into greased slow cooker, and either cook on high for 30 minutes or on low for 3 hours. Check stuffing a few times, and taste. Add more seasoning or broth as needed.

5. It's done when hot throughout, it doesn't take long. Yet you can keep it on warm all day if needed.