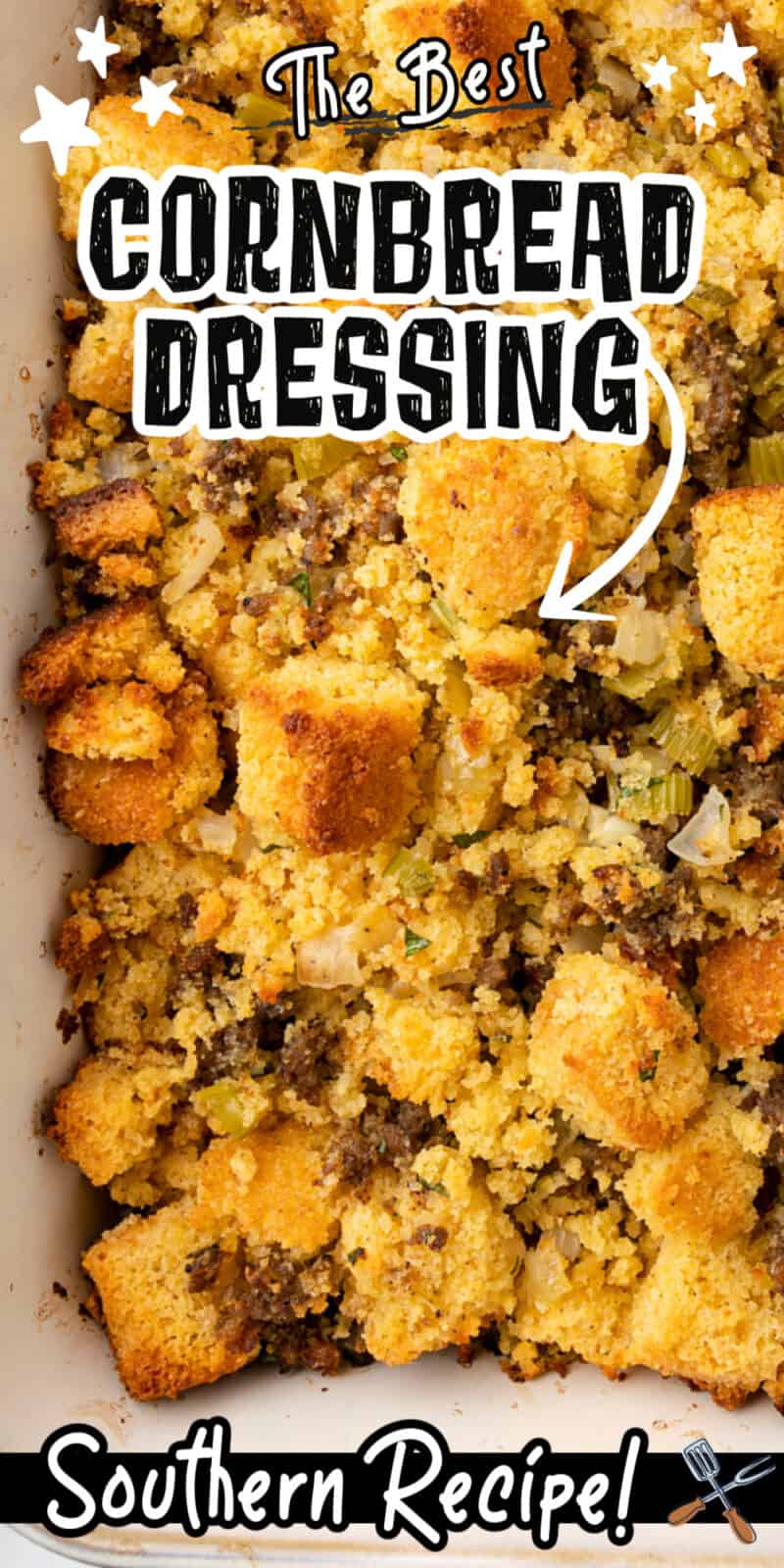 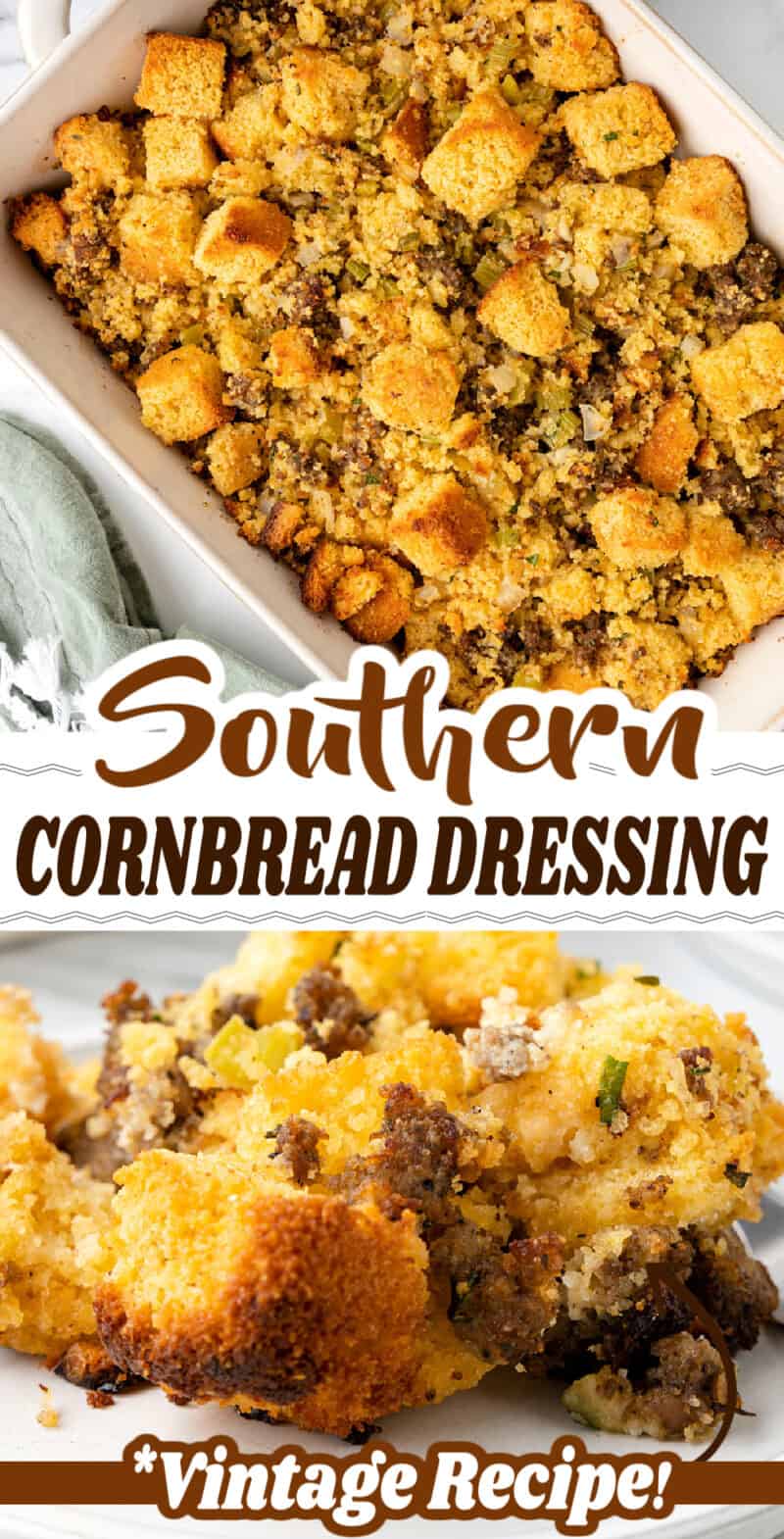 This Southern Cornbread Dressing is a comforting side dish for your holiday meal. Made with simple ingredients and baked; it’s moist, delicious and so easy to make.

Dishes like Smoked Turkey and Slow Cooker Ham take the stage at holiday dinners. Yet it’s often the side dishes that people gobble up first.

For years I’ve made my Mothers Slow Cooker Stuffing for Thanksgiving dinner without fail. Yet when there is oven space and cornbread available, Southern Cornbread Dressing is where its at.

Southerners and team-cornbread will agree, the texture and savory flavor of this perfect side dish is a secret ingredient when compared to stale bread or bread crumbs.

For those not well versed in this Turkey Day side, it’s not the sweet cake-like cornbread that is used. For a great Thanksgiving dressing recipe, you’ll want to use savory cornbread.

Instead, it tastes like corn and butter and possibly with that hint of buttermilk. This truly compliments the savory seasonings and vegetables used in dressing.

Stuffing vs Dressing: The Great Debate

These terms describe the method of cooking only. Both use the similar ingredients and have similar textures, yet ‘stuffing’ refers to cooking inside the cavity of the bird. ‘Dressing’ is cooked by itself in in a baking dish.

Once just a side dish during the holiday season and seen only on the Thanksgiving table, this easy cornbread dressing has taken its rightful place as a staple for Sunday dinner.

You’ll love the simplicity and taste so much that it’ll make an appearance during other special occasions throughout the year.

If you’re about to make this southern cornbread dressing recipe for the first time, prepare to take your Thanksgiving menu to the next level.

This Sausage Cornbread Stuffing is an easy recipe to make. You’ll need the following simple ingredients. As always, the printable recipe card is at the end of the post.

Cornbread – Make sure you’re NOT working with sweet cornbread. You can use store-bought or your own homemade cornbread recipe which has been dried and cubed.

Butter – To prevent sticking. Also adds flavor and some moisture to the dressing.

Onions and Celery – Classic ingredients in dressing. While they are small pieces, they add so much flavor and texture to the recipe.

Garlic – Do you need a reason to include garlic? It’s tasty.

Egg – Use large eggs for this recipe. It helps to bind and holds it all together.

Seasonings – Salt and black pepper does the trick. Tasting is essential so you can add more if required.

Fresh Herbs – Our recipe calls for thyme, fresh parsley and fresh rosemary. In a pinch you can use dried herbs, but for best results in taste – fresh is always best.

Ground Sausage with Sage – A great protein addition, yet optional if you’d like. There are also variations which I discuss below.

Stock (or Broth) and Milk – This adds most of the moisture so you don’t end up with dry dressing. You can use chicken stock, turkey stock, or your own homemade broth.

How to Make Cornbread Dressing

What to Serve with this Dressing

We have so many delicious recipes perfect for a holiday meal here at My Organized Chaos. Some are family recipes and others we’ve grown to love for years.

This traditional recipe made is perfect alongside turkey, Smoked Turkey or Crockpot Ham since you have the oven available to cook it in.

This dressing is also a wonderful recipe paired with Pepper Jelly Cranberry Glazed Ham or a nice Rosemary Garlic Pork Roast which is one of our old-fashioned recipes.

Place southern dressing leftovers in an airtight container or cover with plastic wrap. Can be stored in the refrigerator for up to 4 days.

Pro Tip: Use the leftovers the next day to make Chicken Stuffing Bake.

This is a southern cornbread dressing recipe with sausage. You can omit the sausage if you want, to make a vegetarian dressing. You can also add chicken, turkey or seafood (such as shrimp, lobster, crab meat or crawfish).

You can also use some of the sausage for this recipe and save the rest to make Bisquick Sausage Breakfast Casserole the next morning for an easy holiday brunch.

Making Ahead of Time

If you’re looking to make this Southern recipe ahead of time, I recommend making it up until the point right before you are going to be mixing in the cornbread.

It gets too soggy if you add cornbread the night before. The day you want to make it: bring to room temperature and toss in the cornbread and bake following the directions.

FAQs about this recipe.

If you didn’t add enough liquid prior to baking or if you baked too long, dressing can dry up. Access the texture before baking, and check before done. You can always add a bit more broth during cooking if needed.

This can be caused by adding too much liquid or from over-mixing the cornbread with the other ingredients. Try baking it for longer or adding more cornbread to the mixture.

No. They are comparable in ingredients, yet cornbread stuffing is cooked inside the cavity of poultry. Dressing is cooked outside of it, usually in a casserole dish.