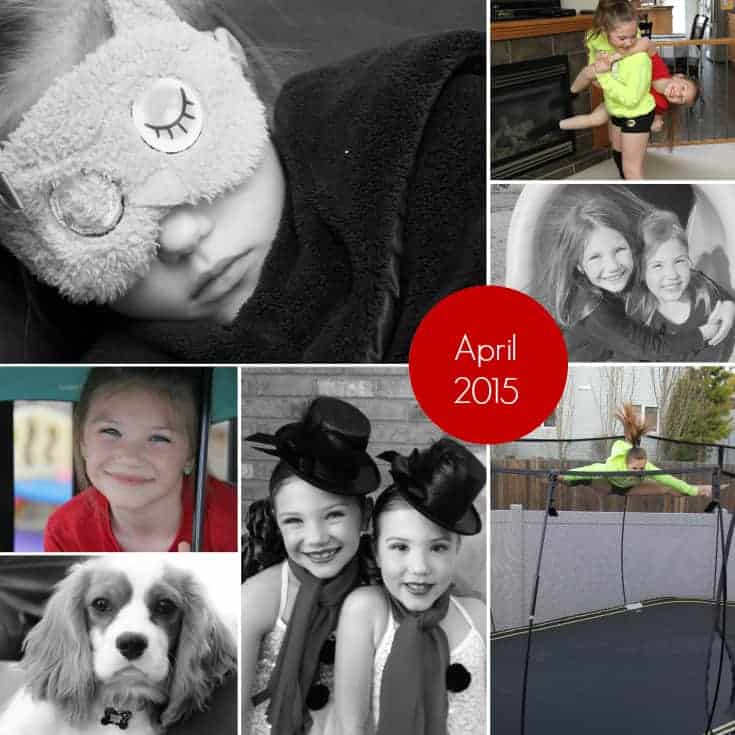 April 2015 – The snow melted and the outdoors were enjoyed! We’re finally seeing the signs of spring, which makes me deliriously happy {and not just ‘case the kids can run off energy while not a few feet away from me … ok that too}. You all know I’m a sun worshiper so April is always one month that I always look forward to.

In April 2015 Isabelle ended her 2nd year of Cheerleading, it was a fantastic year for my little athlete. Her passion amazes me, which is obviously seen by her now daily practices on the trampoline. Yet with the next seasons placements just a couple weeks away, it’s a short ‘break’ for her. She’s eager for the next, which only proves that she found ‘her sport’ {video at the link!}.

The twins theatrical dance class is nearing the end of the season too. Costume fittings, dress rehearsals and in June, showtime! They are the cutest little dancers, but I am a little biased.

And then there’s Charlie, our now 6 month old Cavalier King Charles. I started taking him to obedience classes in April, which is going well. Him and myself have made some new friends along the way. Now, if he’d only stop getting up at 6am and waking the kids with massive kisses {and peeing on my carpet}, I’d be a happy Charlie’s Mommy. Once again, it’s a good thing he’s so adorable, I can’t stay mad at that face.

One photo I was missing from April 2015 is Easter! Truthfully, the morning was so chaotic with egg hunting and chocolate eating madness – I didn’t get many photos at all. Photography before my morning coffee isn’t my forte I guess, I’ll work on that. 😉

If you haven’t made your own Month in Photos yet, you need to give it a try! Gather your best of the month for a collage and then print each month off. By years end you’ll have a year in photos album – without much effort required at all. Voila!