Oftentimes I feel like this parenting thing is drowning me slowly. No matter how diligent I can be, I miss appointments. I forget to remind my kids to brush their teeth {because after 10 and 6 years, they still need to be told. And after that same amount of time, my memory can be just as bad}. I can get so behind in laundry. I even raise my voice more than I’d like to, and more than I should.

The list goes on and on. It’s all so trying.

One of my biggest parenting goals, is to teach my girls not to lie. It’s a quality trait that I despise most. In fact, when I catch them {or anyone for that matter} in a lie, my blood boils instantly. Lying falls under the arrogance and ignorance family to me, the superiority and audacity in thinking one is above what’s right. In fact, if it was possible to own a portable lie detector, I’d have three.

The root of this challenge, is because I’ve always felt that lying is directly in the way of an honest and open relationship. If that pathway is open, then my girls will feel comfortable talking to me, no matter what. Now and when I need it most – those teenage years. *shudder*

Basically, I took baby steps all along, like pulling the weeds to hopefully get that gorgeous garden. It’s a long shot, but when I became a parent, this was one thing I really wanted to succeed in.

So, when lying showed it’s ugly face in the early days of toddlerhood, I tried my best to put my foot down.

You know the round-and-round, repeat-yourself-a-million-times routine. Just like telling your child to pick up their coat 736 times before they actually do it. Well, they haphazardly throw it in the general direction of the hook, all mad-like. Does that count as eventually doing it?

Again, deep breaths and try to put your calm parenting-face on and stay on track. It’s hard to stick on target when distractions {like tantrums} get in the way. It’s the hazards that come with the job.

The frustrating part is spending years trying to instil the ‘no lying policy’ and ‘you’re punished worse when the lie comes out’ – and they still don’t get it!

In the early days, it might have been clearing who wrote ‘Katelyn’ on the banister with a pen. 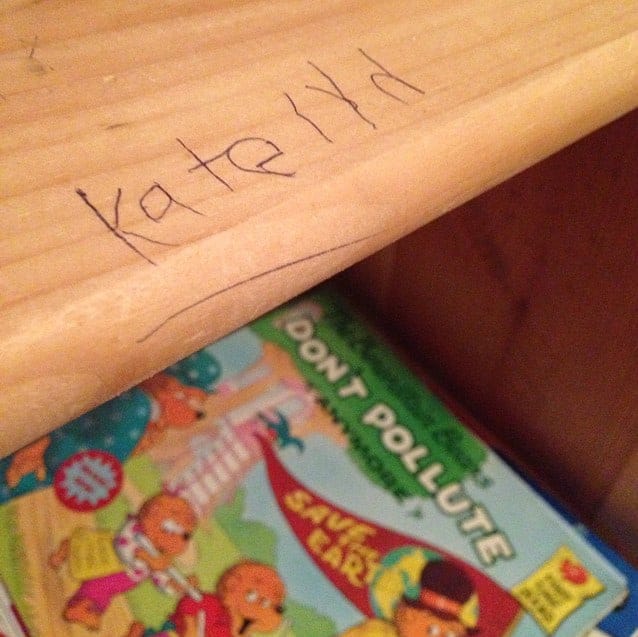 Yet as they age, their skills improve. Names are mastered so now it’s onto drawings. Like this one. 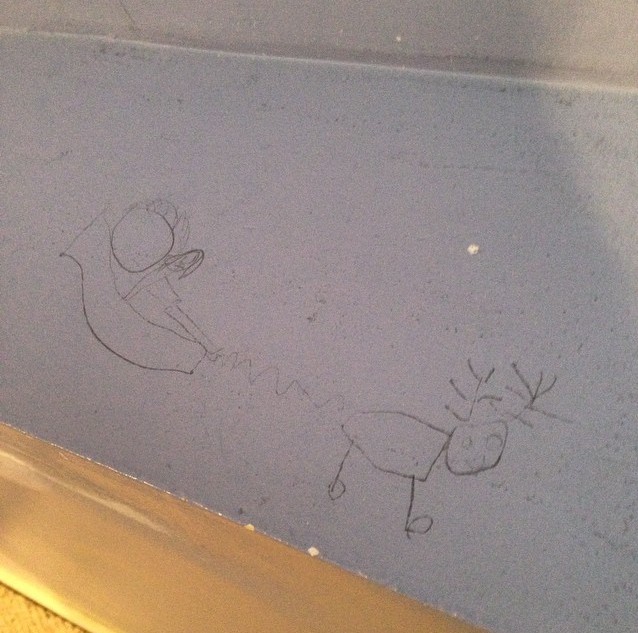 It’s not so clear who did this one, especially after ‘it wasn’t me’ claims, in unison. Having twins means that many times in a situation, I know there’s lying happening, but the truth isn’t so clear.

So, I needed to get a little sneaky.

Teaching my kids not to lie is one battle that I’ve been fighting for way too long. Is it possible that my one main parenting goal, will be a total failure? Did I mix the message somehow and instead make way for compulsive lying disorders? Should I wave the white flag and instead push for them to seek a profession, where lying is a strong and beneficial trait?

Just when I think all is lost, I’m told about a particular conversation which I was absent for ….

Relative A ~ “ok, Isabelle. You can have one more cookie. That’s it, but don’t tell Mom I gave it to you”
Isabelle ~ “Thanks but I have to tell her, I don’t keep secrets from Mom”

Let’s push aside the fact that someone outright told my child to lie and hide something from her parent. That is a whole other rant and wrong-doing in itself. Instead, I concentrate on her response. No secrets? No lies? The heavens part and the angels sing!

I may fail at doing dishes tonight, and I just ran to the mailbox across the street in my ‘I don’t do mornings’ pyjamas. After telling the kids for the 629th time to not be so rough with the puppy, I’ll probably raise my voice and maybe threaten summer school. Also, dinner next Wednesday might be freezer-burnt fish-sticks.

Yet there is always that little ray of light that keeps me from drowning in the waters of parental failure. This time it came in the form of ‘I don’t keep secrets from Mom’. In actuality, this same daughter will most likely lie to my face next week about who took my lip balm from my nightstand. Yet, I’ll always have that one time, when it really mattered most.

I may take one step forward and be pushed two steps back on most days. Yet this time, I’m doing a little dance while taking that one step earned.

Have you danced a step lately?

I’m a #MomsIntuition Ambassador sponsored by Schick Intuition and while this is a compensated post, all thoughts and opinions are 100% my own.