Britax is know for safety, and the Britax Frontier Harness-2-Booster Car Seat is a prime example! Did you know that 1 in 4 car crashes that involve children occur from the side, and side impact collisions can be fatal. The Britax Frontier 85 car seat has ‘True Side Impact Protection’, meaning the design transfers energy away from the child into the padded seat during a crash. You’ll notice this from the image of the seat, the cushioning around the head is superior.

The Energy-Absorbing Base is in the lower portion of the child seat that is specifically designed and engineered to divert crash forces away from your child during a crash. During a crash the vehicle is forced to come to a stop but

everything else in the vehicle will keep moving until it has come to a stop. In a frontal impact crash, your child’s seat will begin to move forward and as the child seat comes to a stop vertical force is applied to it. The energy required to crush the base is being applied to the base during a crash instead of to your child. The Frontier 85 is the only Britax car seat that features this technology.

Energy-Absorbing Versa-Tether is a strap that is located on the back, upper-part of the seat. There is a hook on this strap that attaches to an anchor in your vehicle. The tether system allows you to tether your child seat in either the rear-facing or forward-facing modes. By using the tether, you can reduce the distance that the child’s head moves forward by four to six inches, thereby minimizing the risk of injury during a crash. 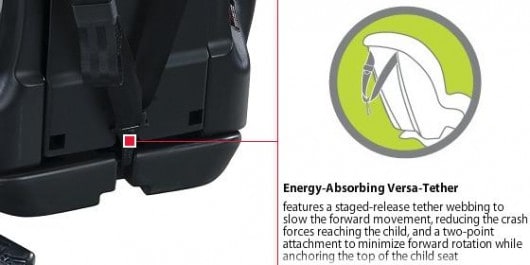 Energy-Absorbing Foam Liner is an energy-absorbing foam that is placed in the shells and head restraints of all Britax seats. The energy-absorbing foam crushes at the point of contact during a crash and the energy required to crush the foam is absorbed by the foam instead of your child. The foam also acts as a barrier between your child and the rigid seat shell and any other intruding objects such as the vehicle door or window.

There is something to be said about the ease of installation when it comes to car seats. I have had a few in the past that have been difficult to install and straps always got twisted and turned. This is my second time with a Britax Car Seat and I am so amazed by the brilliance in design when it comes to the straps, they never get twisted {on the harness or at the back for the anchors}. In fact, the Frontier 85 offers a total of 10 harness positions and three buckle strap positions. To help prevent the harness from twisting and sliding out of place, it has a cobble weave design with sewn buckle stops. At first I took advantage of it being assembled with the 5-point harness and had the Twins test-drive the seat. Then, I took off the harness, to use it as a booster for my oldest daughter.

Britax car seats are undeniably heavier than some other brand of seats {The Frontier as well as the Advocate 70 CS car seat I received earlier in the year}. And this is one thing I do notice about this seat. Yet, once a seat is installed into my vehicle, it’s very rarely moved – so the weight isn’t a negative aspect in my mind. Another thing to note is the plush and quality fabrics and foam used, since they make the seat very comfortable for children {especially for long trips}. The plush seat cover is extremely thick and the underlying foam provides extra comfort, therefore encouraging your child to stay in the proper seating position. The integrated armrests help provide a secure fit and a natural place to rest the arms. The girls also love the integrated cup holders, which can hold common beverages like 20 oz water bottle. 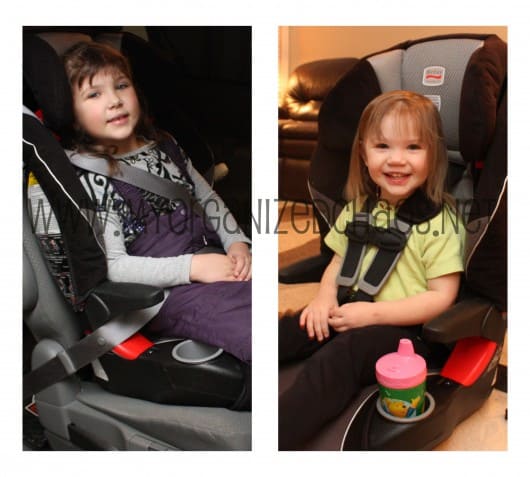 When used as a belt-positioning booster the Frontier 85 is compatible with the new Britax SecureGuard Belt Positioning Accessory Clip. The SecureGuard, which is sold separately, works with the vehicle safety belt to prevent the child from sliding under the lap-belt portion of the safety belt during impact, reducing the risk of abdominal injury.

My oldest has been using this car seat since it arrived at our door. I commented the other day, that the Twins could use that seat too, but she wouldn’t hear of it. For now, she has claimed it as her own – and refuses to use the booster seat she had used before she sat in the Frontier 85. To me that says so much for comfort! And, I feel so much assurance knowing she is in such a safe car seat!

As for why to give the gift of Britax this year?
Well, for all the reasons stated above!
Whether it’s a car seat or one of their strollers or travel systems, gifting Britax is like giving style and safety.
Now, what parent won’t love that?!