If you were following my Tweets on Twitter this last month, you’d know that I am doing a Nokia N86 Smartphone Review. Writing this review,was a little difficult, as I tried to pinpoint what information my readers would get the most benefit out of. Would you want specs and technical jargon when it comes to the Nokia N86 Smartphone? I came to the conclusion that I really wanted to talk about my thoughts on this phone, from the point of view as an everyday user – a busy Mom. After all, that’s where all my reviews are based, and the main goal of this blog. There are many websites dedicated to discussing and comparing the bits and pieces that make up the phone – but not a whole lot that focus on the use of one by an everyday parent… 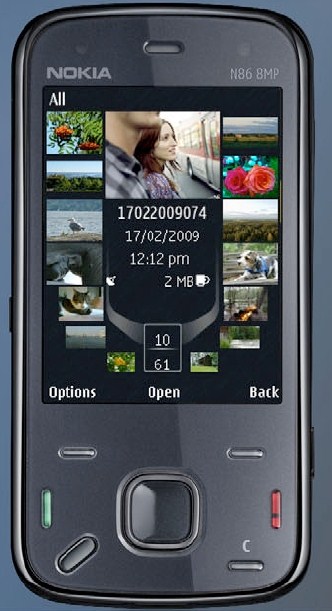 The Nokia N86 8 Mp Smartphone is a sleek and light phone, when taking into consideration that it has a scratch-resistant hardened glass front and metal detailing. When holding it, you know that it’s sturdy and built to last. It has a with a good sized screen that makes it easily seen in bright and low lights. The phone features a 2-way slider, one accesses the T9 keypad and the other for the camera. When I first got it, I easily set up my social networking sites – Twitter, Facebook and a couple of email accounts. Most of the networking sites that I used most often are accessed by a one-button easy bookmark. I loved not having to scroll though many pages, just to reach one specific area. This made it easy and quick to check email or Twitter – which in itself saves on battery power {not to mention the time}. I had to charge this phone almost nightly, but part of that was due to me playing around with it so very much. Whenever I had some free time, I wandered and experimented with all it’s features. 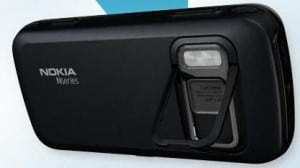 By far the most impressive feature that immediately made me squeal with delight is the fantastic 8 mega pixel camera and double LED flash on the Nokia N86. It boasts a 20 x digital zoom, and a wide-angle Carl Zeiss lens. But, that’s not all – the camera boasts autofocus, geotagging and variable aperture as well. The photos came out clear and beautifully colored, and the zoom capabilities just astounded me. I was able to capture fabulous images AND video on the Nokia N86, which I never could with previous camera phones. Seriously, the 8MP Camera feature on this phone made me leave my everyday digital at home most times, I felt that confident in it’s capabilities {and loving the fact that I didn’t need to carry around an additional camera!} When recording video, there are many options for recording and playing the videos in various formats too. I cannot stress enough how fabulous this camera is – by far the best I’ve used on a phone – even for those fast moving kids, and shots using indoor lighting! It’s also equipped with a mini USB port, making it easy to download to the computer or a television {with a TV output}. 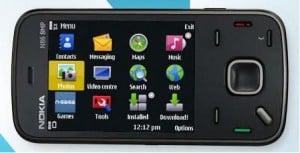 When it comes to navigation, the Nokia N86 has a wonderful GPS receiver, complete with an Ovi Maps application and compass. No matter where I was, I could pinpoint my exact location, right down to the address. I used the navigation features both in and out of town, and it loaded faster and provided directions quicker than our separate GPS handset. This was great to use when trying to easily plan your trip and directions, as you go.

The music system for the Nokia N86 supports a wide variety of formats {WMA, MP3, RA , WAV and m4a}. With a fully charged battery, you can get a continuous playback of 25 hours of music. I asked my husband, who adored his iPod to pieces, what kind of battery life his iPod gets in comparison, which he said about 10-12 hours tops. After hearing that the Nokia N86 could get 25 hours of music play on a fully charged battery, he was very surprised. And, I think a little disappointed in his trusty iPod.

The only thing that has me holding back and running to purchase the Nokia N86 for myself, is the T9 keyboard. For those that are die-hard fans of a QWERTY panel and touchscreens, this may not be the best choice in phone for you. Yet, if you message and text minimally, or are used to using and prefer the T9 keyboard – the dual directional sliders are the cream of the crop for this phone. The 8MP camera features that I mentioned already, just may be your deciding factor when choosing the smartphone for you! The Nokia N86 camera is still on my mind after having reviewing it for a few weeks. It did leave a good and lasting impression on myself, I’m almost tempted to master the T9 keyboard, just so I can have the other unique and impressive features which make the Nokia N86 stand out.

Disclosure: I was provided with product to facilitate this review post, opinions are my own.