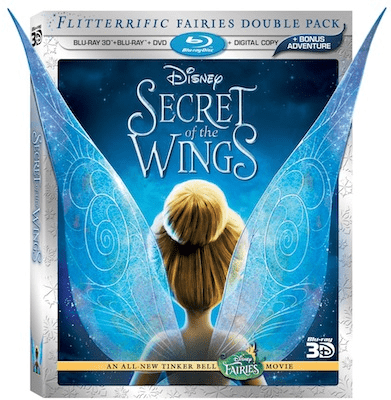 Secret of the Wings will be debuting on Blu-ray™ Combo Pack, DVD and Digital on October 23, 2012, the film marks the first time ever Tinker Bell will fly on Disney Blu-ray 3D.

The voice cast will include Academy Award®-Winner Anjelica Huston, Timothy Dalton, Lucy Liu, Raven-Symoné and many more. A DisneyToon Studios production, the film is directed by Peggy Holmes, co-directed by Bobs Gannaway, and produced by Michael Wigert. John Lasseter serves as Executive Producer.

Synopsis: For Tinker Bell and the other warm season fairies, the Winter Woods remains a mysterious and forbidden place. “Secret of the Wings” takes audiences on an amazing journey of discovery with Tink, into this forbidden world where she discovers a magical secret that changes her life forever.

If you recall my time at Disney Toon Studios in 2010, I was fortunate to have watched Tinker Bell and the Great Fairy Rescue and learn astonishing behind-the-scenes information about making the film. I also got to partake in many amazing activities as Disney’s guest in beautiful Los Angeles. I have always loved Tinker Bell, yet this experience really did put her in a very special place in my heart.

When I heard the news of Secret of the Wings, I knew I had to share with you. I am excited for this film release and can’t wait to see what new fairy adventures are coming this Fall.

To celebrate the upcoming release of “Secret of the Wings,” Disney has launched a new destination in Facebook for parents to stay updated on Disney Fairies news as well as receive the best new content and activities that they can share with their children. Audiences can become a fan now at:  https://www.facebook.com/DisneyFairies.

Have a peek at the new film:


Disclosure: I received product to facilitate this review, all opinions are my own.