During my time in Los Angeles last month for #DisneyInHomeBloggers, I had a complete OMG moment.

While press trips and other behind-the-scenes tours that I attend, leave me with that ‘wow’ feeling {completely fortunate that I have these moments, btw}, there was one particular tour that was nothing short of amazing. Literally, my mouth dropped and I don’t think it shut the entire time.

Let me take you through a top secret location, with a tour of Disney Animation Research Library. Security was high, and we weren’t allowed to take any photos while there. Yet, we had a Disney professional photographer capturing the entire LA trip, and only he was allowed to take photos in this building during our tour. 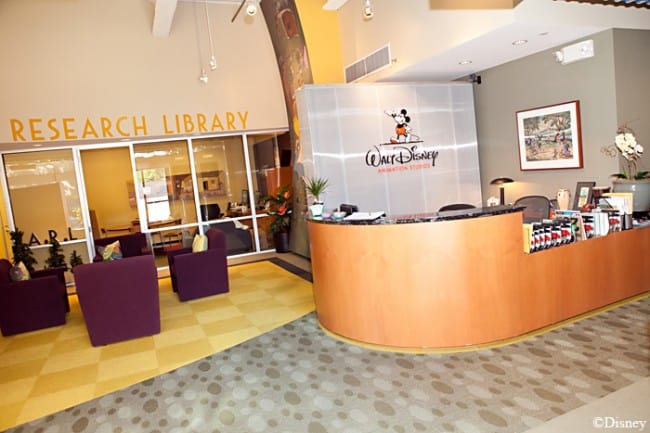 Housed here since 1999  is original pencil/color paper sketches and glass pane cells from ALL Disney movies, about 60-65 million pieces. Even ones that never made it to production, or sketches cut from feature films. This, my friends, is where all the magic and dreams are held!

I was witness to what only a select few will ever see. In addition, this location is one of the original Disney renaissance buildings from way-back-when. So not only were we gazing upon history, we were doing so in possibly the very same building where these pieces were actually drawn.

Disney’s Animation Research Library has 4 main teams {reflections, research, design, digital team} and they have the mission, ‘to preserve the art the best we know how, but to still keep it accessible to all the various Disney units through digitization”

Picture this: Temperature and humidity controlled rooms full of storage cabinets which are like vaults. It was chilly in these rooms, yet the temperature was kept constant to prevent mold and decay of all the precious artifacts. There aren’t sprinkler systems in this building {that would be trading evils for the paper collection}. Instead there are automatic fire suppression systems and inert gasses and carbon dioxide to starve the air {and thus, fire} from oxygen. 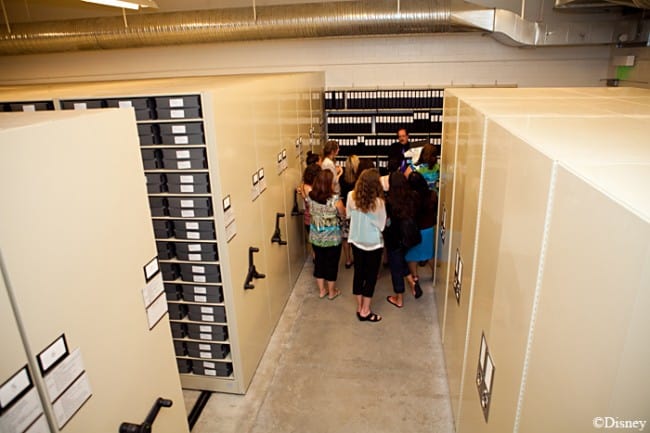 One vault of many housed feature films from 1937-1977. Actual scenes, and OOP {out of picture} sketches that didn’t make the film, yet might be used for bonus material or other methods in the future. Some were actually thrown out way back when, yet the ones salvaged were stuffed into envelopes and kept in the corner of the studio basement.

Now, they are being placed into order and categorized into binders and cabinets. How many? Considering you have about 20 frames per second, that’s a lot of sketches for one film. Multiply this by ALL the Disney masterpieces ever made. Wow! 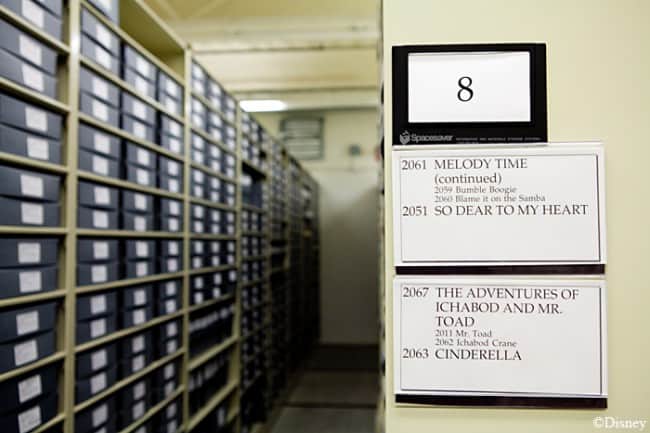 With the upcoming release of the Cinderella Diamond Edition Blu-ray and DVD combo pack on October 2, 2012, we took extra time learning about the sketches and information from this film. For instance, there are over 72 binders holding Cinderella sketches. There are also 27 misc. boxes, which are still being sorted through and pieced together. As of right now, they don’t know what these misc. sketches were intended for and are currently piecing it all together like a puzzle.

There is much talk about ‘Disney cells’, truth is, the studio didn’t save a lot of cells. Famous Disney artist Marc Davis {who worked on Cinderella} once said artists used to call cells residue, they were tossed away or wiped off and re-used {boo!}. In harder times, some sold them at the parks {double boo!}. In reality, most of the archive is paper, layout drawing and concept art.

Yet, they do have Delta Cabinets to house the larger pan backgrounds painted on glass. You might recognize the scene in the the photo below, the log bridge background from Sleeping Beauty. Used with the academy award winning Multiplane Camera, these allowed for filming various levels frame by frame, to give the illusion of depth. 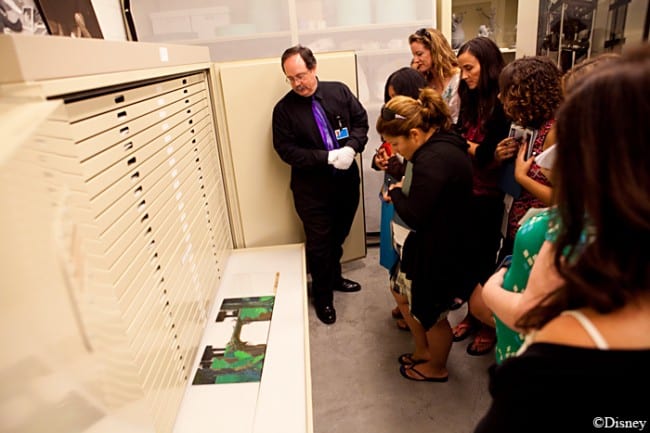 They also have the most bad-@ss digital cameras I’ve even seen for their Digitization Team. Each and every sketch is photographed, digitally backed up and stored for future use. That way if a particular sketch is needed for future print or publicity use, they don’t have to handle the original, yet use the stored image. Cool, right?

There is one scanner used for the very large sketches, yet most are preserved via a phase-1 camera or digital scanback cameras. They shoot at 240px and each raw file is .5GB. Incredible! In fact, if you wanted to look at one preserved photo taken in entirety, you’d need a screen 6ft x 7ft to do so. They shoot this large to get the best detail, see each and every stroke of the pencil, and so that each image could be used in any format in the future. 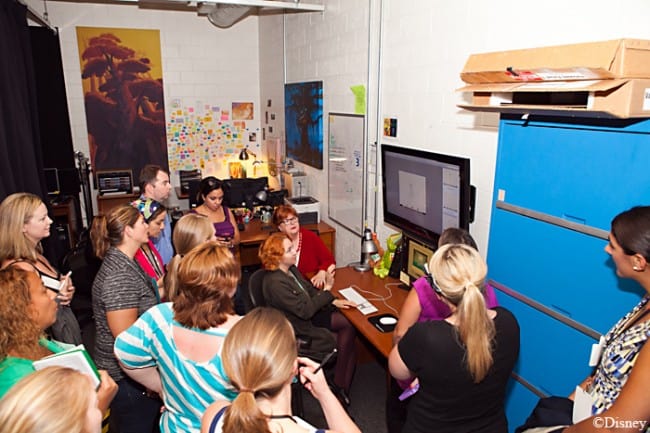 For instance, there is an image of Ariel floating down on her back in Disneyland’s World of Color show {a fantastic show, btw!}. To make that scene, they used a digital image from the Animation Library. And you can bet that imagineers and designers visit the library frequently to study every last detail for the New Fantasyland expansion in Walt Disney World. From posters and merchandise to future films and shorts, the digital images are used so that originals are kept untouched and preserved.

In the Dimensional Vault, there were cabinets of sculptures and machetes/study models with the same preservation and climate control {even light screens over the cabinets as light alone ruins the pieces over time}. Most impressive to myself was seeing Pinocchio, found 8-9 years ago in the studio basement. Brought to the library, this is the actual Pinocchio held by Walt in this famous photo. 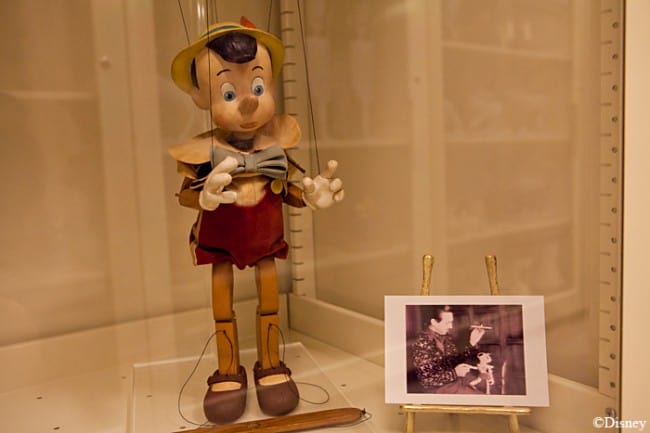 I also got to see the original machetes from The Nightmare Before Christmas!  Used to study shading for light, these were recently used when the 3D version of the film was made. There was even a study model for the orchestra from Fantasia – to see where shadows would lie with the instruments. 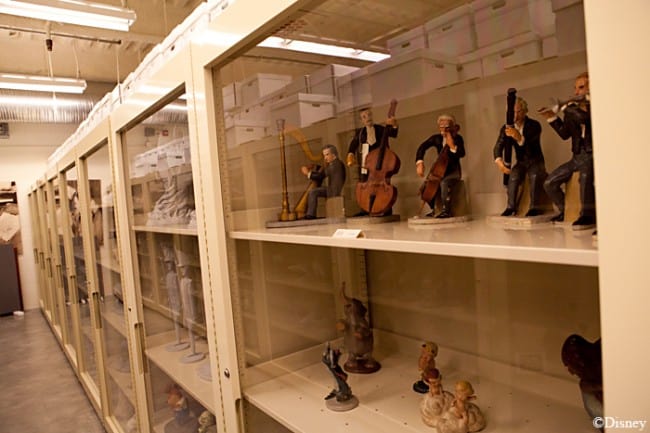 This entire tour was one which I’ll never forget and will most likely be a tale I’ll tell for years upon years. It was like we were all apart of Disney history that day, it was just one incredible ‘jaw-dropping’ and magical experience. 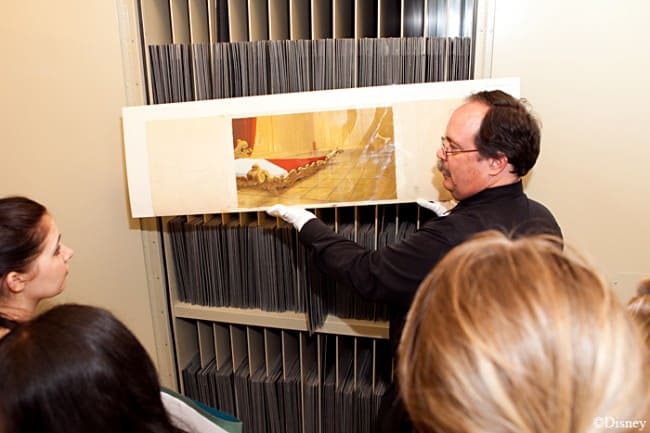