Should Twins Sleep in the Same Room? It’s been a year coming, and quite honestly it’s probably been the roughest battle for me as a Mom of Twins. The transition from crib to bed! No, they’ve never fallen out. Not scared of the dark.

It’s the fact that bedtime was always one huge slumber party! Last year, as soon as the twins went from crib to bed, it’s been a fit of giggles, jumps and chaos! The hyper madness was too much to take, they would go at it for hours. Then, after such a late bedtime, they would be so grouchy and tired the next day {no longer having naps either}. It was especially frustrating since my daughter started grade school last year, and was up half the night listening to her twin toddler sisters partying in the next room. We were all so tired! 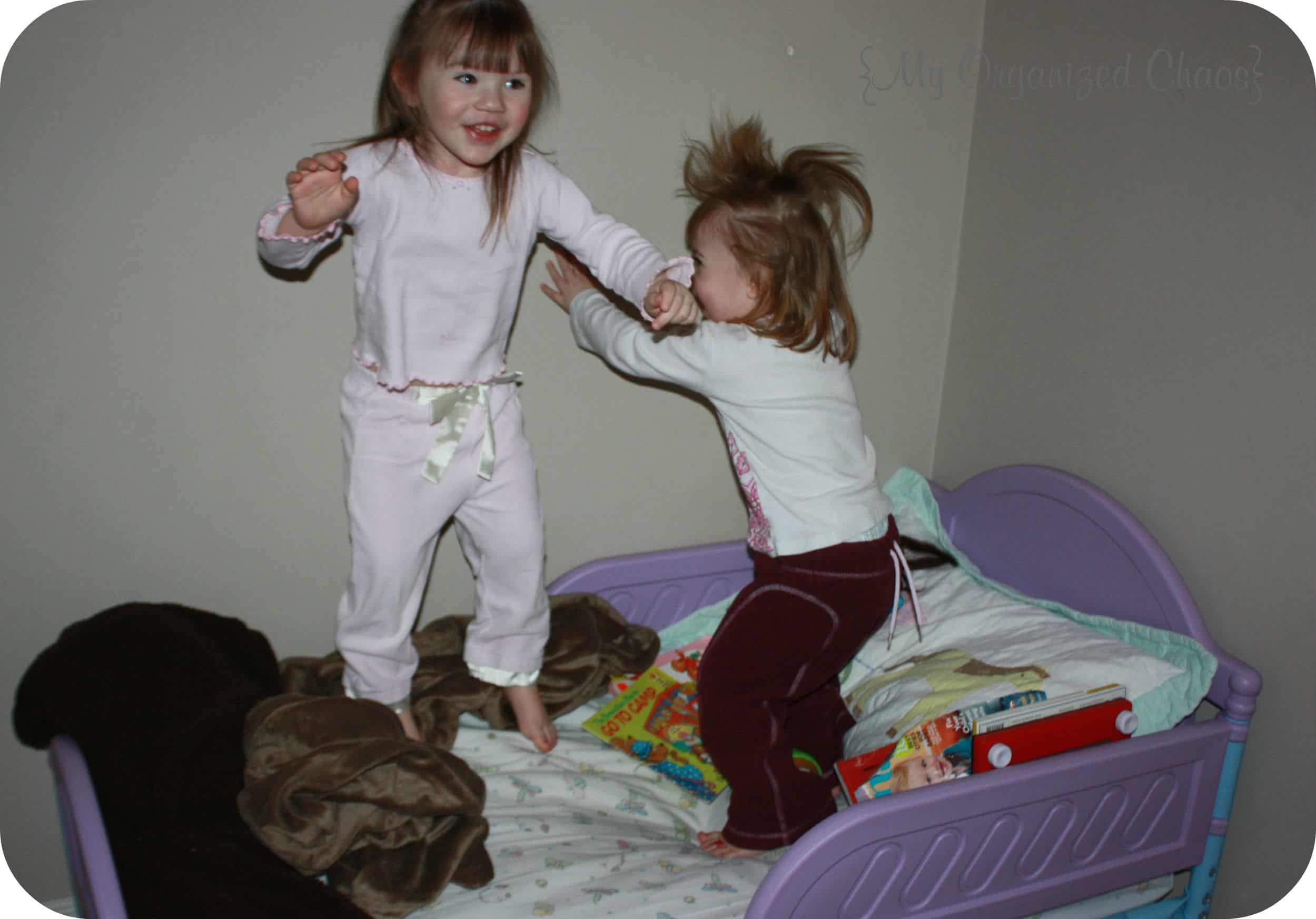 So, I adjusted the best way I could – one of them {always Katie} started sleeping in the hallway. I would put Sophia to bed and Katie would get her pillow and a blanket and lay down in the hallway. After she fell asleep, I would carry her back to her bed and there they would both sleep until morning.

Yep, my toddler slept in the hallway for a year. sigh. 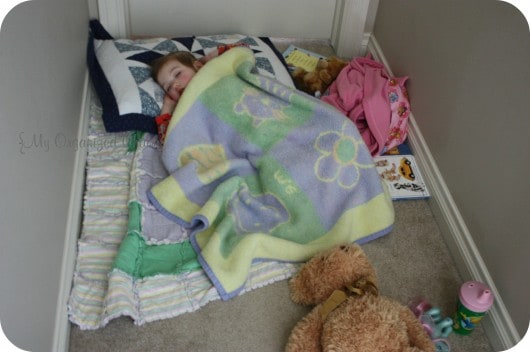 About once a week I would try and get them both to fall asleep in their beds, only to have the slumber party fill the evening. Reminders, Shhh’ing, pleading and yes threatening {to take a toy away} – would not help. Each time I tried, I gave up after an hour, and end up seperating the twins and putting Katie in the hallway {then, and only then would they fall asleep within 5 minutes}.

Yep, in the hallway. Katies spot. I’ll never look at my hallway the same way.

It was getting old though, and jokes about kids sleeping in dresser drawers were passed around the dinner table. My poor little hallway sleeping girl! It was especially hard when we had company over. There, down the hall is my daughter falling asleep on the floor. “Watch your step if you need to go to the bathroom, my daughter is sleeping in the hallway.”

In the last month I have been trying extra hard to get them both to sleep in the same room, and finally {knock on wood}, it seems to be working. It might take 10-15 minutes of talking, giggling and the seldom ‘pitter-patter’ heard on the floor. But, it isn’t anything like before.

I have been thinking about what has changed, what is making this work now when it didn’t before? Were they just getting older? More tired than before? Then it hit me – it’s darker now at bedtime, more that in the Spring and Summer!

We do have a darkening shade on their bedroom window, yet there was always that annoying gap between shade and window, enough to allow them to see most everything in the room. This also allowed them to wander in ‘darkness’, with enough precision to play around and still scoot into their beds when they heard Mom coming to investigate.

It’s darker now with Winter coming, and I notice that it’s darker in their rooms at bedtime. The darkness keeps them in their beds, though there is the little chats and giggles to be heard for a bit. But, there’s no jumping and running around. This darkness also helps for sleepiness to settle in, until they succumb to the fact that it’s bedtime.

So, if you have twins or kids that share a room and the party is too much to bear, you might want to put a blanket over the window. It’s worth a shot!

And, if you too have a twin or child that is sleeping in the hallway {hey, it gave me some sanity this past year}, I’m here to let you know that it does get better. Well, until the next parenting hurdle, right?

We as parents are never alone in our struggles, together we can overcome the chaos!