With most things that you purchase, you try them on. Not just with clothing, but this applies to other items as well. You can take swatches home, demo in-store, or sample before you buy. I’d like to think that I’m an informed and certain customer, expect when it comes to … tires. When faced with this purchase, you can literally see the hesitation on my face.

When choosing tires; most are likely to read reviews, shop based on sales, or trusting the recommendation of an employee. Yet, oftentimes recommendations or sales are based on supply and partnerships – not solely on what is a best fit.

While there is a return policy on tires, you’d prefer to avoid that right? Choosing your purchase should be based on a knowledgeable decision. After all, we put a lot of trust and faith in tires – they are the only things between you and the road. Not to mention, we all carry precious cargo, day in and day out. Rinse and repeat.

Shouldn’t we know with all certainty, that a tire will withstand all that we need of them? 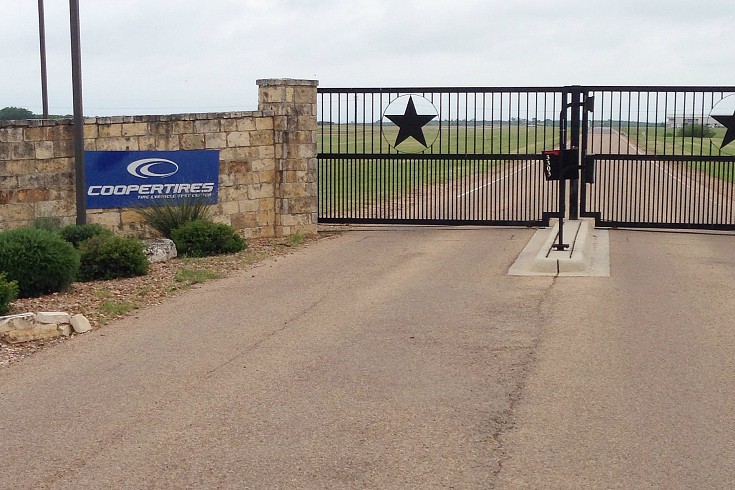 I recently joined Cooper Tire at their San Antonio Texas test track facility {#CooperRnD}, to check out their new Discoverer SRX tires. This Texas site is where all the  fun happens. While the facility has a many tracks, I was at their ‘wet pad’ most, a 14 acre paved lot which was flooded with 20,000 gallons of water. 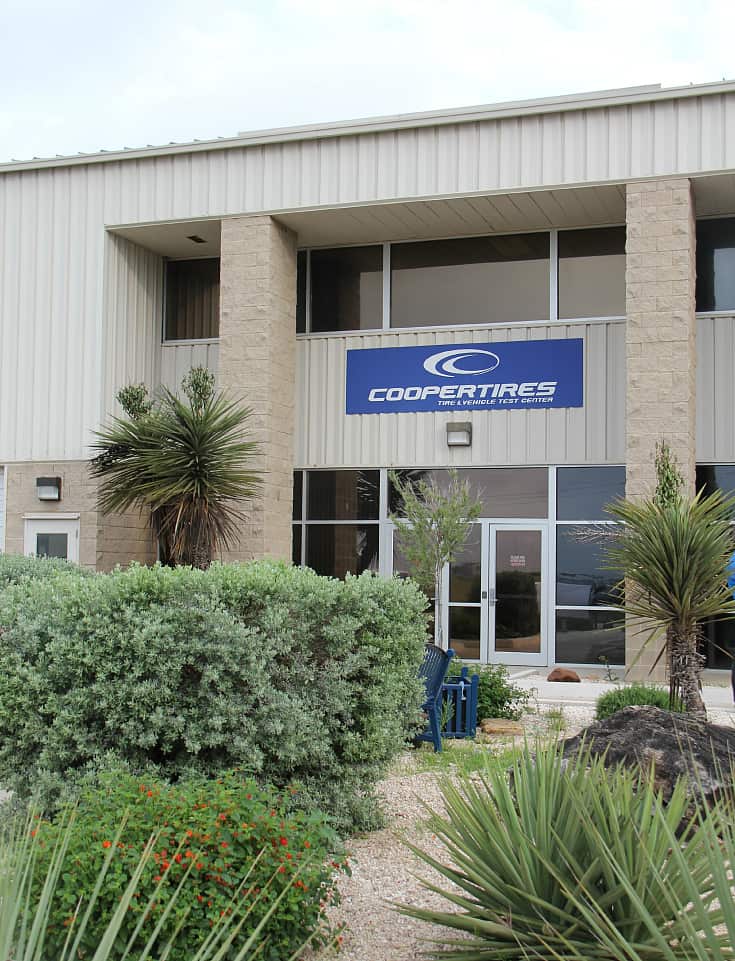 One exercise for the wet pad, was driving two absolutely identical Chevrolet Tahoes {except for the tires}, through an obstacle course with many curves. Oh, and at the highest speeds I could. One Tahoe had brand new Cooper Tires Discoverer SRX on it {all-seasons designed for CUVs and SUVs}, and the other, a brand new competing tire brand {Goodyear Wrangler SR-As}.

Going into the test drive, I knew that Cooper Tires would be better, or why else would we do the test right? Yet, what I didn’t expect was just how much of a difference I’d notice.

In actuality, I was pretty much blown away. Take that literally if you will, since I was all over the road and not able to keep control of the Tahoe equipped with the competing brand. I was sliding and fishtailing everywhere. And I mean – everywhere. At times I felt the competitors tires wanting to grip and would for a brief time, then let go as if it was too much for them to handle. 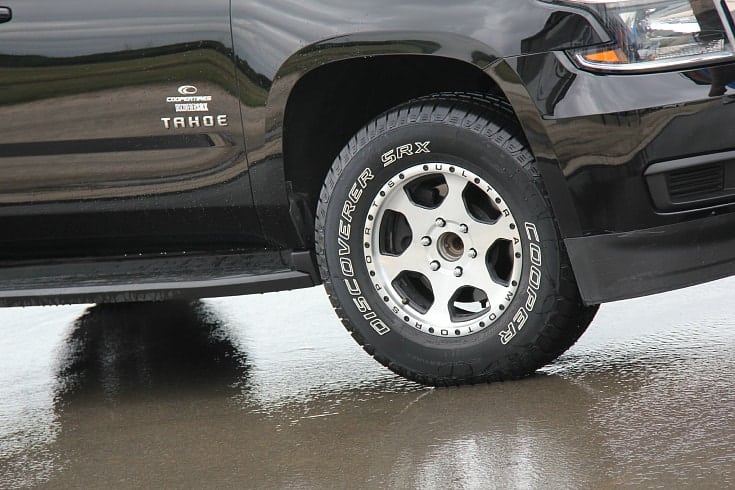 When driving the Tahoe with the Discoverer SRX tires, I had full control of the vehicle and didn’t slide once. At high speeds, curves and on a flooded surface – I still felt the road beneath me and not once did I nor the Tahoe hesitate.

Not only was the performance complete opposites when testing the Cooper Tires Discoverer SRX and the competition – but my own driving abilities were different too. I had 100% total confidence driving the Tahoe with the Cooper Tires Discoverer SRX, and even given the circumstances, I was actually fairly relaxed. Yet, while driving in the Tahoe with the competitor, my fists were clenched, as was my whole body. Very quickly I learned not to put trust in the competitors tires, as I knew they would fail. 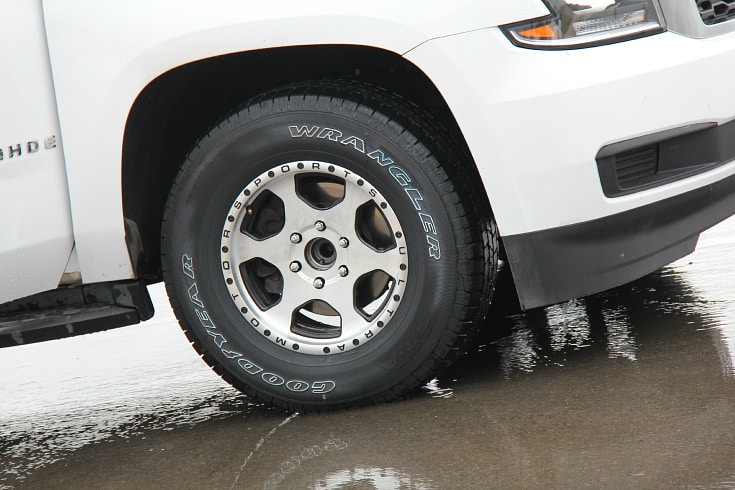 When driving with the competition, pylons were flying, and the vehicle was all over the place. Now, take these two driving experiences and apply them to real life outside a controlled wet pad track. A scenario where trees, other cars, and pedestrians are there – and not pylons. I’d rather be in control of the vehicle and know that the tires between me and the road are doing the job intended. Wouldn’t you?

Bottom line: Cooper Tires Discoverer SRX were better tires and made me a better driver. It’s all about the safest choice possible and this test proved that and more.

Each time we’ve purchased new tires, we get four, there’s never been a question since all of ours seem to wear at the same rate. It was startling to discover how many people just replace two tires at a time, most likely due to saving a dollar. Regardless, it’s fact that some people only buy new tires in pairs.

So, for those that do – where do you put the new ones? Does it matter? YES! 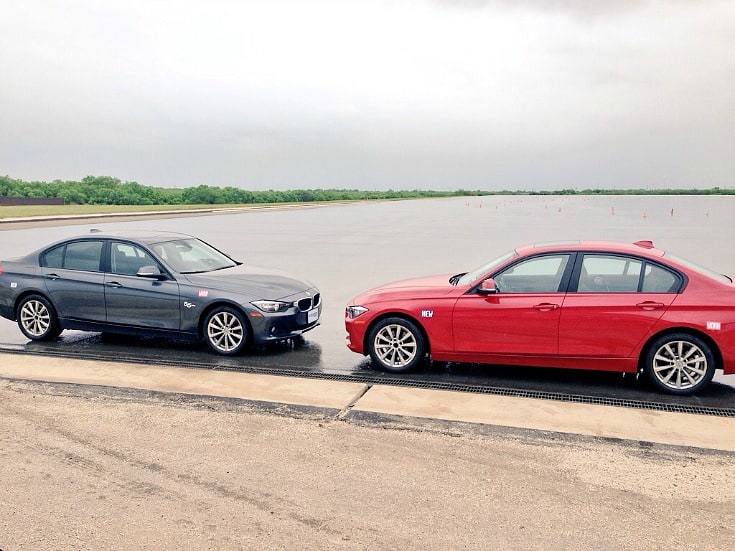 When I drove the BMW with the new tires on the front, I couldn’t corner on the wet pad – at all, without doing a few 360s. Each and every time. No matter how careful I was, with each turn, I’d lose complete control and spin like top. In fact, I took out countless pylons with each turn. Not good.

In comparison, when driving the BMW with the new tires on the rear, I didn’t do a 360 once. I could actually take corners like a boss.

So, if you replace only two tires on your vehicle – put them on the REAR. This applies to front or rear wheel drive vehicles as well.

When to Replace Tires

So, I showed you which tires to purchase, and where to put them. The only question that remains is – when do I replace them? Can you look at a tire and know how much life is left, before it’s too late? Me neither. 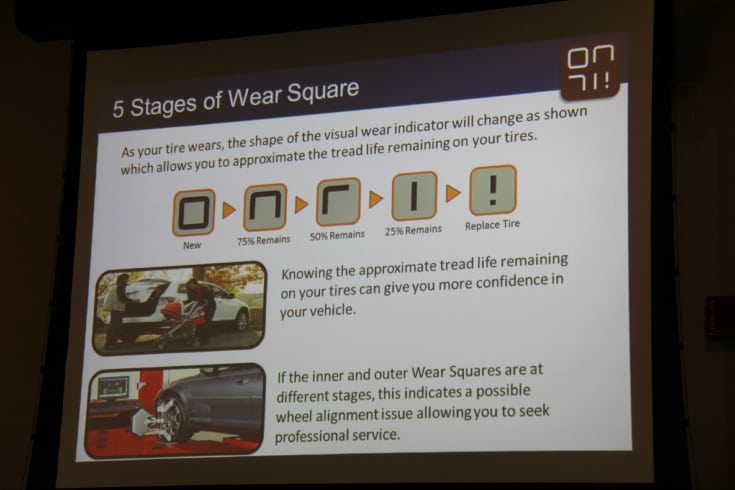 Cooper Tires makes that simple, with their patented Five Stages of Wear Square which is embedded into their tires. It’s an easy to read indicator that allows you to know the wear at one quick glance. Over time, this recognizable square changes to show the amount of wear, eventually becoming an exclamation mark when it’s time to replace. Handy, right? 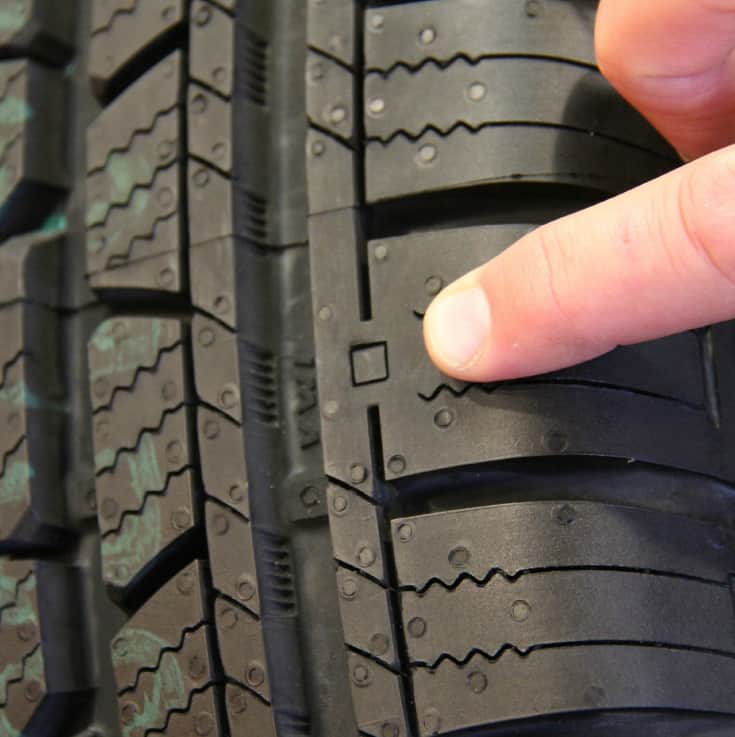 As well, the wear square is placed on both the inner and outer parts of each tire. This way you’ll also know when to rotate your tires, if you visually notice that one square is wearing at a different rate than the another. This is one way that Cooper Tires gives drivers confidence, knowledge and the ability to get the biggest bang for their buck.

I, like many others, am a casual driver. I joke that I see the inside of my car more than the inside of my house, but it’s true. I rely on my tires, whether I consciously think about it or not.

To illustrate the performance of other tires and how differing drivers depend on a quality set of tires, I drove with Indy legend Johnny Unser. He drove a sweet Corvette Stingray Z06, which was equipped with Cooper Tires ultra high performance Zeon RS3-S tires. 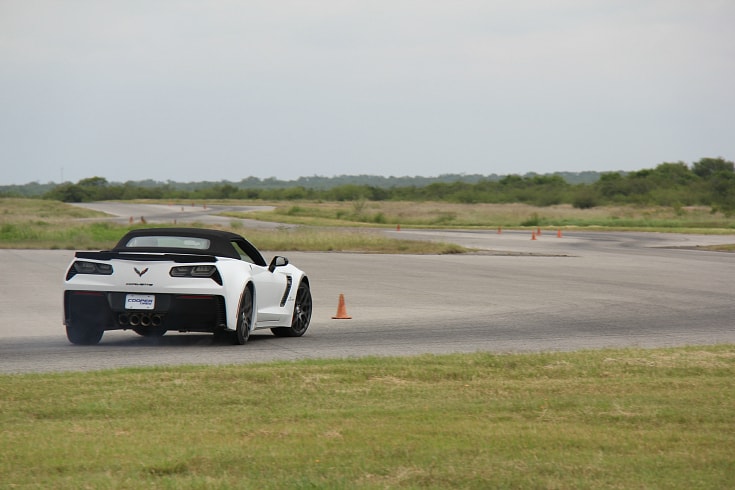 Unser took me in the passenger seats as he raced on the ‘hot lap’ at the test track facility. Racing with a race car driver? Yeah, that happened.

Curves, speed and maximum fun – it was an experience I’ll never forget.

Other lessons learned this day was how to maintain tires, check pressure and learn how Cooper Tires are made – all thanks to the tire nerds in attendance. I also got a lesson in distracted driving, which proved that attentive driving is key! 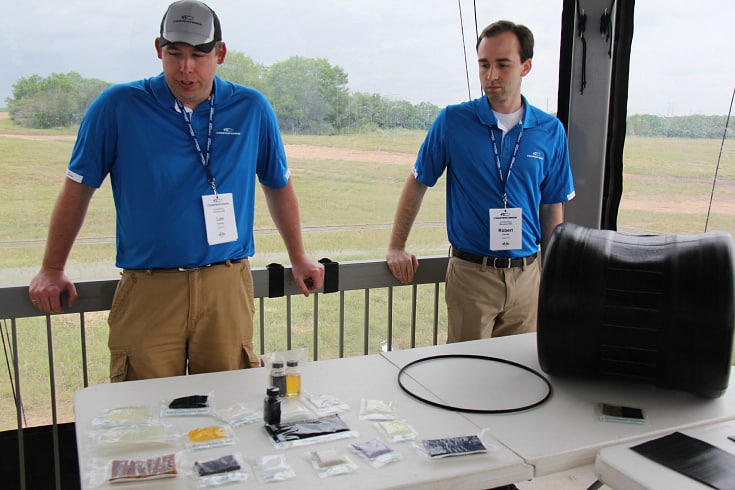 While interesting and brilliant actually, I’ll leave the design and engineering information on the Discoverer SRX for more technical reviews, since I think the experience and the action behind the engineering, is what we consumers really need to hear about.

For someone that gets that ‘deer in headlights’ look when tires are mentioned, I left with more tire-knowledge than I ever thought I could have. I wish everyone could go to the facility and test drive, to see how all tires aren’t similar, despite them all looking the same. That’s another impressive fact about Cooper Tires test facility, they invite competitors to use their tracks for testing as well. 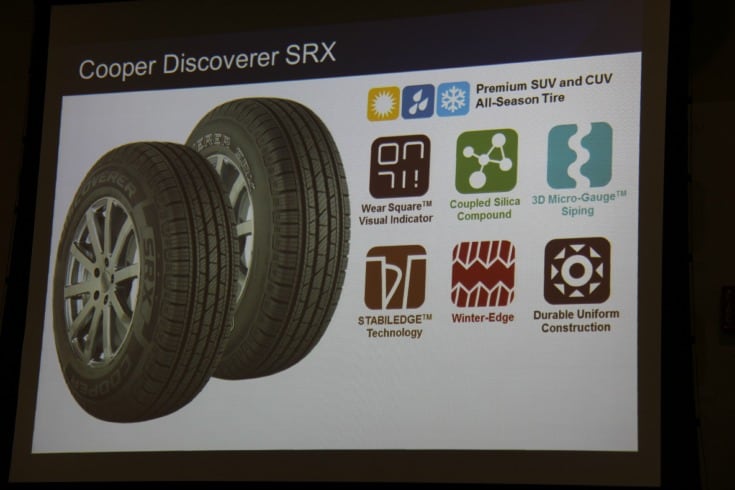 Final Thought : Now, for those that have read through this article and are left thinking …

“Now Tammi, for reals, how much of a test did you put these tires under? Unser? He’s impressive – but how seriously did you corner and speed on that wet pad test track?”

Well, I didn’t know this when driving the track. Yet at dinner that evening, I was presented with a little award from Cooper Tires, as they were clocking all the drivers that day. 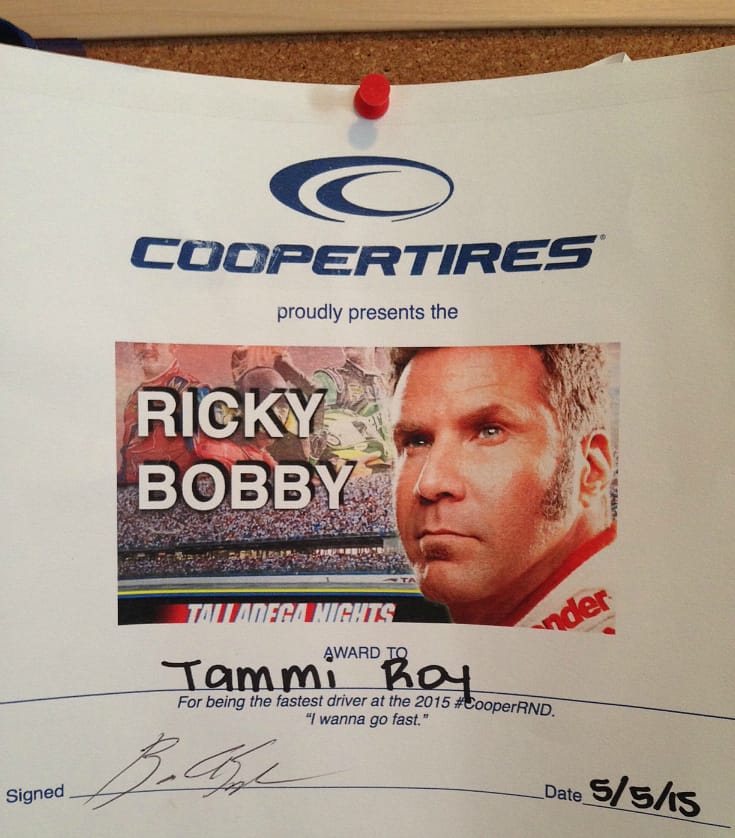 Yep, this lead foot put those tires to the test alright! Shake and bake!