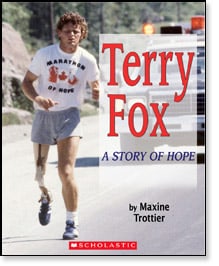 I was just a toddler when Terry Fox set out on a mission to run across Canada to raise money to fight Cancer with his Marathon Of Hope, yet I know the story well. Terry Fox was diagnosed with bone Cancer at age 18, and only days after diagnosis his leg was amputated, and he wore a leg prosthesis. Being active and athletic his whole life, he was walking and running only a couple of months after he got his prosthesis. Terry Fox set out on the Eastern Coast, with only a few witnesses seeing him off on his journey. He ran an average of 26 miles a day, making his way to the West Coast {in tremendous pain too, I must add}. After 143 days, he just couldn’t do it anymore – the cancer had returned, this time to his lungs. Terry Fox died one month before his 23rd birthday {I vividly recall my entire family crying when they heard the news}. Yet, Terry’s determination, courage and strength lives on since that day in 1981. This year marks the 30th anniversary of the Marathon Of Hope, and the book ‘Terry Fox: A Story Of Hope’ has been re-released to celebrate his life and his journey. Written by Maxine Trottier, this book is a short biography of his life from birth to his passing.

Thanks to Scholastic Canada, I received a copy of Terry Fox: A Story Of Hope and it was literally impossible to put this book down. It’s a short read, but one that moved me immensely. There are great facts that I didn’t know myself, and I feel so much more admiration for Terry Fox after reading it. I also liked the section on how he was honored during the Vancouver 2010 Winter Olympics, his parents were torchbearers.

During his quest, he raised 24 million dollars, yet his story lives on today. Most schools participate in the Terry Fox Run or Walk every year, there is the Terry Fox Foundation and many many more fundraisers and events throughout the year in Canada. It’s our time to remember Terry’s dedication and determination, and help his legacy and goals live on. Yet, many countries, based on the story of Terry Fox now hold International Runs, to raise money for Cancer as well. To date, thanks to Terry Fox, there has been over 500 million dollars raised. I know he would be proud.

Terry Fox: A Story of Hope is a wonderful biography for kids {intended for ages 7-12}, since it’s filled with photos and actual letters that he wrote. His story is one that inspires and motivates – one that I have used to show Isabelle that one person can make a huge difference in this world. This book is a must for all schools, a great teaching tool for kids to know why they participate in the Terry Fox Run or Walk – anyone can accomplish anything with determination, courage and hope. Terry Fox is a hero which no Canadian will ever forget.

“Even if I don’t finish, we need others to continue.
It’s got to keep going without me.” Terry Fox

Disclosure: I was provided with product to facilitate this review post, opinions are my own.