When I was a child, I pretty much lived outdoors. I have so many vivid memories of riding bikes, putting on routines in the park with my friends, and building actual wooden tree houses in a nearby forest. My winters were spent outdoors as well, you could always find me playing in the snow or skating. 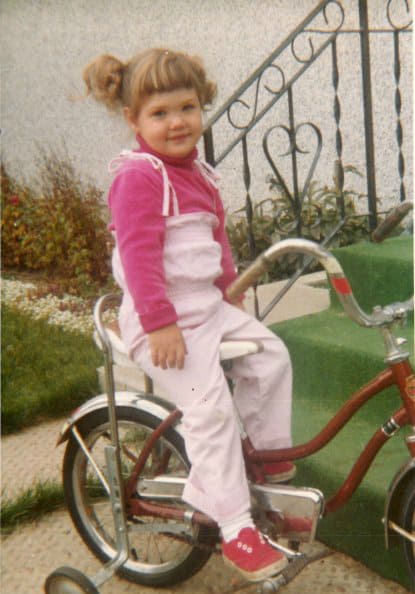 In fact, I think I have more memories of playing outdoors than I do inside. I could paint the entire neighbourhood as it stood at that time, in great detail. Yet recollection of my home at the time, aren’t as clear.

As an adult, I totally admit to having a preference for hibernation during our cold Canadian winter months. Yet in the summer, bring on the outdoors. I may not be found doing dance routine in the park anymore, but am there and present when my kids put one on for me. Yet, that’s also combined with capturing the event and sharing on social media. So, todays tech is definitely an aspect of todays time.

Do you think there’s a strong difference between childhood fun spanning the last 3 generations?

Watch this new video from Nature Valley, and prepare for a reality check:

It’s not easy for me to totally unplug, given that my career involves being online, and in many facets. Part of my job is to stay up on the newest trends, and this trickles down to my kids too, for review purposes and such.

While my daughters aren’t ‘gamers or techies’ per say, and don’t have a device at arms reach that often, the possibility of becoming tech-dependent could become an issue down the road. When I tell them to put the tech away and ‘just go and play’, sometimes it’s a struggle/battle to unlock their eyes from the screen. I can totally see how easy it is to form an addiction to tech!

That being said, I have {and have always had} strict limits on the frequency and duration of device-time. I reserve tech items to early mornings when there is a lag before we leave the house, rainy days when every other activity has been exhausted, and long car rides only after they’ve mentioned being bored a couple dozen times.

We are a family that has found balance, since already this summer we have done so much outdoors. We have camped many times already this season, went on day-trips, to the beach, and much backyard play with friends. We’ve already gone through many bottles of sunscreen and bug spray, and summer has only just begun. 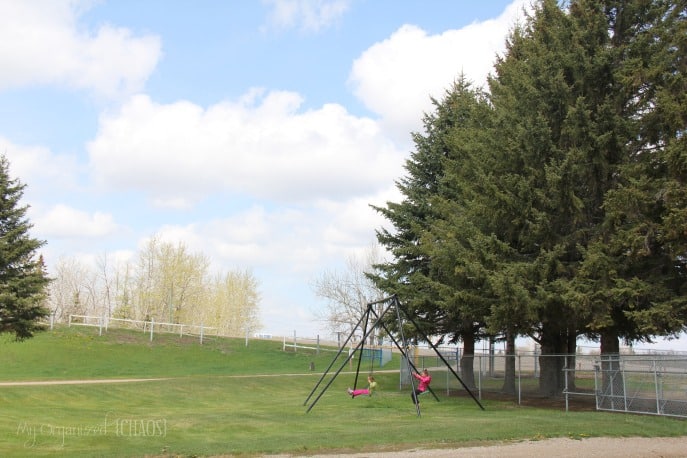 Yet, I have to admit, this is all at my urging. If I wasn’t as aware of tech-addiction, and wasn’t such an outdoor-play-pusher, would my girls opt for the device when given the choice? As well, what about their children, and their own screen-time compared with nature-time?

So, I want my girls to KNOW the importance of getting out from behind a screen, so that when given a choice {or making a choice for their own children}, they choose nature. I shudder at the thought that some kids might look back on their summer and decide that the best part was ‘finishing level 8’ …

I watched the Nature Valley Rediscover the Joy of Nature video with my girls when it was released. My twins didn’t get it {they’re young}, but my oldest was quiet afterward and went to play in the backyard after it ended. Considering I had just given them all free-reign to ‘play whatever’ just minutes before I called them into my office to view, I’d say the video did click with her. She is an outdoor girl, yet it wasn’t the nicest of days, and I would have put money on tech. Colour me impressed!

Through this video, Nature Valley is urging Canadians to #RediscoverNature and try to reverse the pattern on tech-dependence for todays and future generations. To help, they have a Summer Bucket List that families can fill out, with plans on how to Rediscover the Joys of Nature.

Here is our Summer Bucket List, which is on our fridge, filled out with activity suggestions from my children. Truthfully, we could have listed dozens of things – yet for many families, this is a good start. 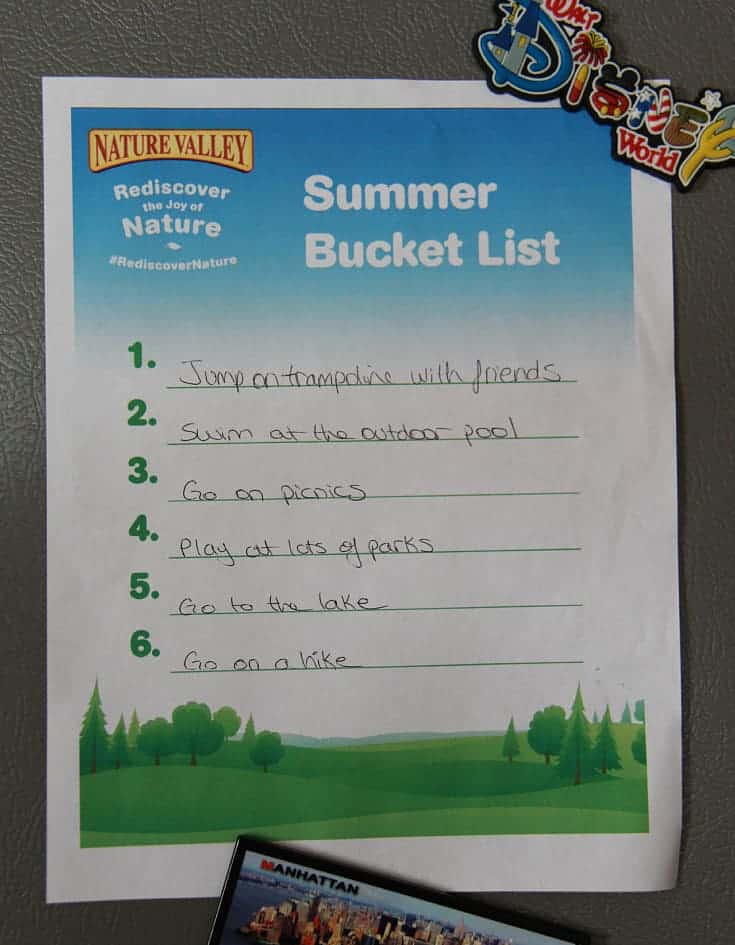 With each item on our list, we’ve already made plans on which ones to cross off first. The girls thought of combining items and take a picnic with us when we go on a hike. Which is great, since this means out outings and outdoor-time will be that much longer. Plus, many of these we want to do time and again, the girls are excited about that aspect.

Tech won’t be totally absent when we cross off our #RediscoverNature goals, as I will be sharing them on social media {Facebook, Twitter, Instagram}. Only because I want to encourage others to get out and take on their own nature discoveries, and make lasting memories like generations before have done. It’s important! I talk a lot about having ’18 summers’ with your children, so we need to make each one count.

To help you start, below is a Summer Bucket List Printable. Simply click on the image below and print a full size copy to fill out with your family. When you cross an event off your bucket list, let me know on social media, tagging it with #RediscoverNature. 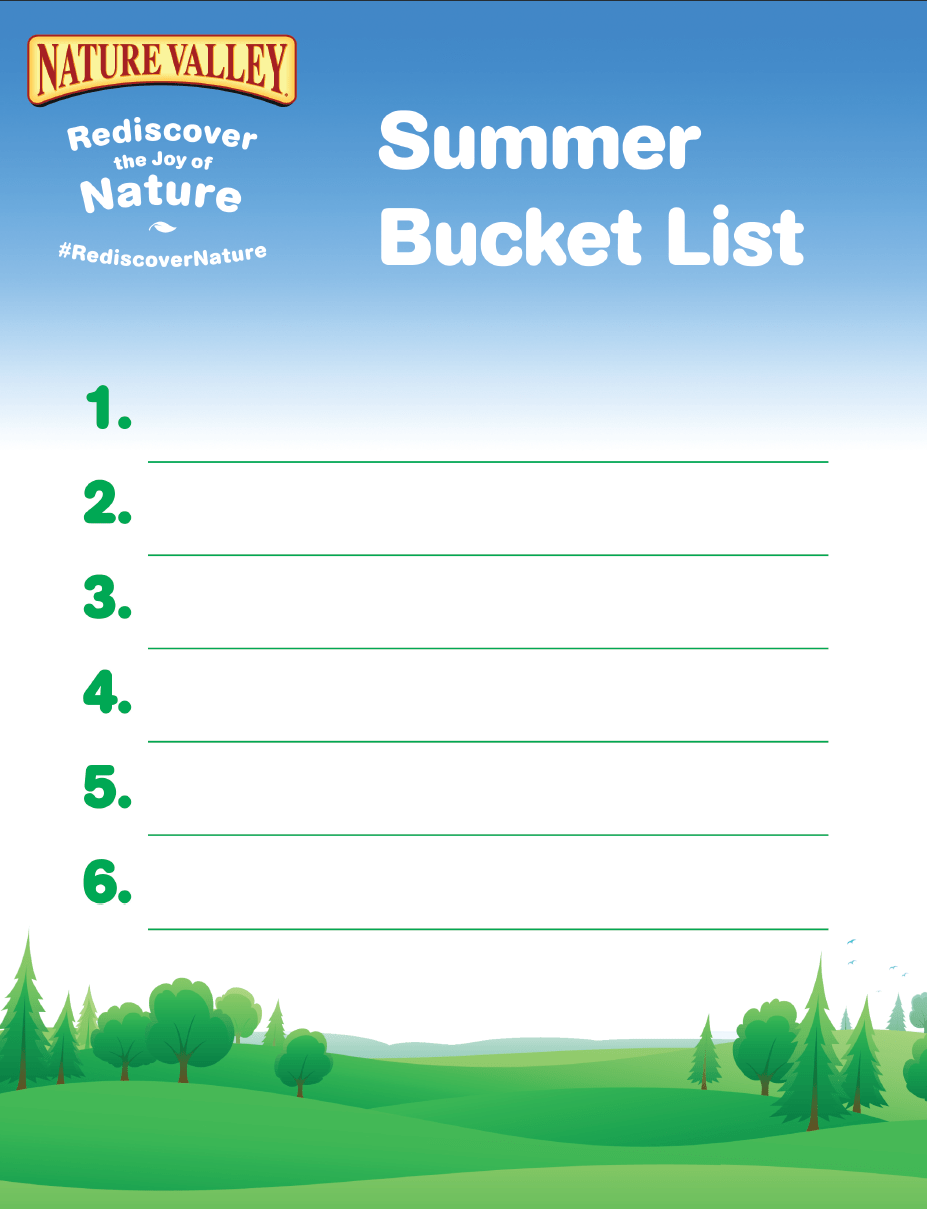 I am compensated for my part in the #RediscoverNature campaign from Nature Valley. Opinions, as always, are 100% my own.