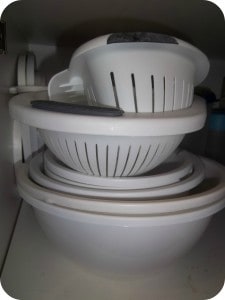 The plastic bowls led to all of that cupboards’ contents – Which led to the cupboard next to it. I then decided that I could store some of my large appliances that I used mainly for Winter. That led me to another cupboard – which resulted in the pantry being next.

Before I knew it, my entire kitchen was disheveled, anything and everything on kitchen counters and on the floor. It didn’t stop there though. After all, if I was to store some appliances in my basement laundry room, I needed to make room in that space. But that meant moving the board games to another area. Which led to off-season shoes and jackets. 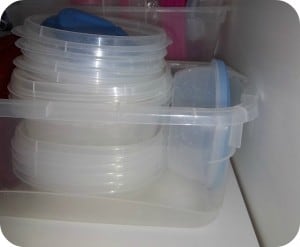 And so on. And so forth.

2 garbage bags of trash and another 2 for donations.

Who would have thought that one little plastic container would perpetuate an entire day’s worth of cleaning and organizing of a good portion of my house? An entire day! When all was said and done I went back to the original cupboard and threw that cursed plastic container in the garbage. Take That!