The time has come in my twin-Mom life when I have to face ditching the double diapers, I have to face Potty Training Twins. Yes, I am currently in the process of {kinda} potty training my twins, who are 2 years old.

If I had it my way, I would keep them in diapers for longer {training two at once scares me to death!}. Yet, one was showing distinct and clear signs that she was ready to put on the big girl panties. It was, in fact, getting pairs of big girl panties for Christmas that sparked the interest. Another perfect example that kids can change us parents’ plans, at any time. We really don’t have control over most things, as much as we’d like to believe we do.

I have read that when potty training twins, the chances that they both train at the same time – are slim. Most multiple Mom’s have to go through the process separately with each child {yet identical twins have a higher chance of training at the same time because they have the same metabolism}. I wanted the twins to encourage each other – companionship and competition all the way. Instead, one clearly showed *much* interest and the other – no interest at all {nothing is ever that easy when parenting, right?}. Katie, my one twin who was really eager – simply started going on her own. One day I found her on the potty, and she has kept mostly dry pants since then. I call her my potty-wonder, what a gem of a child! Now, If only all children potty trained that easily! 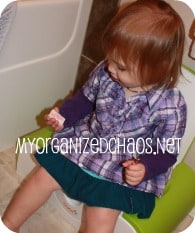 I use the treat method – for every pee there’s much applause and cheer, and one small candy or chocolate as an incentive. At first Sophia was so upset that her twin sister was getting praise and treats – she screamed hysterically, expected some too. No matter what though, she would not agree to sit on the potty, candy reward or not. It was heart-wrenching as a mother, to watch her feel so left out – yet I stuck with it. After a few days of constant tantrums, Sophia did a complete turn around and then didn’t care at all that her sister was getting candy. Yet, she was still adamant to stay as far away from that bathroom as possible.

After a little over a week, Sophia started to come around. In small baby steps it progressed from watching her sister use the potty, to attempting to sit on it {for only a few seconds at first}. Now, she will attempt to go potty a few times a day, but with little actual success. But, it’s a start, right? And, Sophia gets a lot of kisses and cheer for making that attempt. Looking at the situation now, I almost think that the one-on-one approach is almost easier, and less stressful for all involved than to tag team potty training.

So, these days I spend a ton of time in my bathroom. Oh, how I wish I had a bigger bathroom {and a TV in there would help too}. It gets so crowded with the three of us in there, and there’s only so many songs you can sing and books you can read, to keep you occupied.

The odd time they do ‘go’ together, I see the competition and team-approach in ‘doing the business’. They high-five and hug each other when they both have a success {and enjoy a small treat together afterward}. It actually warms the heart to see them both go through this milestone together – I never thought going potty would be so very cute!

I fully expect a setback or two along the way, as well as better days than others. Potty training and twins was one of my ultimate fears as a M.O.M, and so far it hasn’t been as bad as I had imagined. I think the key is to just wait until they show that interest enough to stay with it. And, if accidents happen – I don’t react. As much as it’s a pain to have 2 soaked toddlers running around, I can’t add more stress on everyone.

As for the amounts of toilet paper we 4 girls are using these days.
Now that’s scary!