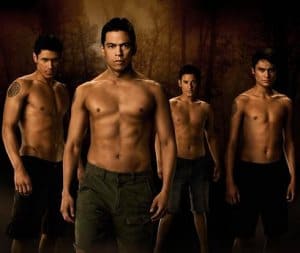 It was a month ago when myself and my friends bought our tickets for Twilight Saga, New Moon. Can you tell we are fans? The time finally came, I thought the time would never come. The movie did not disappoint, at all. In fact, my heart pounded throughout the entire thing.

Yes, from the first time I read the Twilight Saga, I formed a huge soft spot for Edward. And, I didn’t succumb to sympathizing at all with Jacob Black in the story.

I had heard from others that the movie New Moon would tug at my heartstrings and tempt me to side with the wolves. To prepare myself and protect my stand on being a member of Team Edward, I walked into New Moon today chanting “Team Cullens” in my head. I felt like a 13 year old fan, terribly excited and giddy to watch the next chapter on screen. I even paused before settling into my seat and called out to the crowd seated in the theatre, “Happy New Moon Day Everyone!”. Yes, I was that giddy.

So, myself and my small group of girlfriends watch the film and giggle and let out a ‘whoop’ in all the right places. What can I say? We’re a bunch of Moms without kids for the night … and a little hopped on M&M’s. So yes, we were an enthusiastic group.

Right next to myself and my friends were a small group of Wolf Fans who cheered whenever the pack was on-screen. Continually. Like all.the.time.

Determined to stand firm on my Team Edward stance and not sway to the hairy side, I felt the need to defend Cullen fans everywhere, so I cheered especially loud for the Vampires.

And this is where it got a little ugly.

I might have let out one “Boo!” when the ‘opposing team’ cheered during one scene. Yes, I actually did.

Yet, I got a few snickers from fellow pale-face supporters and a good laugh from my friends. Keep in mind that I am not the type of person to get overly enthusiastic during a move – but it’s the Twilight saga. C’mon! And again I blame the M&M’s and the freedom of no kids attached to my legs {and I’m sticking to that excuse}.

When the movie ended, people clapped and filed out of the theater. Then I noticed the group of wolf-lovers taking pictures of the closing credits. Aha! There has to be more reason behind the enthusiasm, and more than just fans of the books and movies.

A friend of mine asked the group about their glee. Turns out, this group of people are the family of Chaske Spencer, who plays Sam in the movie. His character is the Alpha Wolf in New Moon, the leader of the pack. And his family was here…Something I would have never imagined to see in Small city Alberta, Canada. Pretty cool, right!

…but then I realized that I had Boo’ed….

… I boo’ed his family…. {my own face goes pale at this time of realization}

I know, I shake my head at myself too.

I really do have nothing against the wolves {especially Chaske}, it’s just that they don’t sparkle! … Yet I will tell you, seeing the pack shirtless was something definitely worth seeing on the big screen. Oh yes, that was one nice perk of the movie.

Anyway, onto the story.

Chaske’s Mother, Grandfather, sister and other members of his family were all there to support him and watch his performance. I had a brief conversation with Chaske Spencer’s family and they are super nice people. They were filled with such excitement and love.

As I talked with them I felt the pride pour out of their very souls. It made the hair on my neck raise and my eyes fill with tears. I was proud with them.

As I walked out of the theater I didn’t hold back the growing empathy and support for the wolves. I silenced the Team Edward chants in my head and looked at the saga from a different perspective. I guess it was Chaske’s family’s happiness and commitment that made me open my heart a little for the opposing team. Their family devotion was very much similar to the bond of the wolf pack.

Thanks to meeting Chaske’s family and looking at the movie from another point of view, I think I am finally able to say, “Go Wolves, Go!”

I credit http://www.chaskespencer.com/ for the photos used, for this post