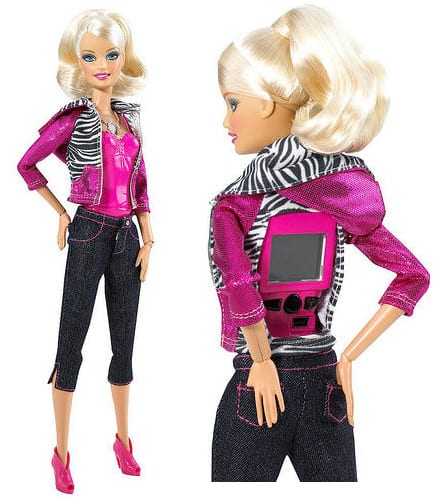 Today I heard a familiar squeal from the living room. You know, the one so often heard this close to Christmas when the kids see a commercial for the latest hot toy? So, I peek around the corner {at the urging of ‘Mom, Mom, Mom, Look – MOM!”} to see that there was a new Barbie on the market, called Barbie Video Girl. This Barbie has a small video camera, well hidden on her neck by resembling a necklace. The captured video footage can then be viewed on a color LCD screen on Barbie’s back. Sure, young videographers and Barbie-lovers will adore being able to edit that footage and then downloading it to a computer and the net – but would you ever think twice about a Barbie capturing unwelcome video?

Often times, I have given my girls Barbies and dolls to play with in the bathroom while I have a quick shower – but not no more! Barbie Video Girl could possibly cause privacy concerns when placed under the wrong hands. After all, there’s plenty of barbies in my daughters’ room ‘watching’ her get dressed for school everyday. I have taught my daughter to not talk to strangers, not take anything from strangers – but now I’d have to watch for unsuspecting Barbies lurking about?

This may be an extreme example, yet as parents we do have to think of these things. I haven’t even seen this Barbie in real life, yet the commercial made me think about this product in its entirety. I might be more comfortable with Barbie Video Girl had she been holding a camera, and not such a discreet and sneaky video-cam. Don’t get me wrong, with 3 girls – we are a Barbie household. I got my first ‘job’ as a kid, to support my Barbie addiction. I think I spend most of my day dressing Barbies for the Twins. And heck, sometimes I even look like Barbie.

Yet, as much as I’d love my daughter to learn more about media, editing and computers – I’m leaning toward her shooting video with a camera, and simply playing dolls with Barbie.

What are your thoughts on Barbie Video Girl?

Disclosure: This post is in no way affiliated or compensated, opinions are my own.