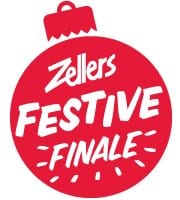 Recall my post sharing one hilarious video as part of the Zellers: The festive Finale? You know, the one where a Zellers exec is taking the lighthearted approach to the end of the Canadian store? Did you know that there’s other videos in the series {see below for another}, each just as hilarious and all of them being a part of a huge savings promotion for the holiday season?! Read on!

These humorous antics are part of some great happenings going on at the Zellers Facebook page. It’s a page that I frequent daily, as well as many of my friends. Why you ask? ‘Cause it’s the holiday season, silly – and saving is what we all want most right now!

If you go to the Festive Finale tab on the Zellers Facebook page, you’ll see Carol greeting you to the page {another hilarious watch}! But more importantly, that is where you can vote on exclusive coupons, record a real radio commercial and more!

Right now they are asking customers how they want a $10 off coupon when you spend $40 at Zellers : when you wear red, a holiday sweater or a beard…. 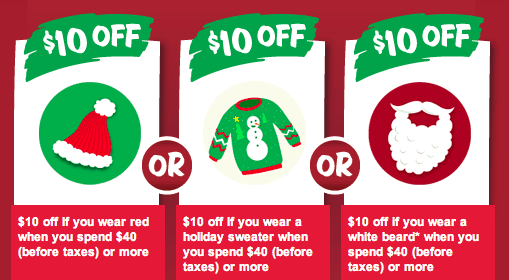 Right now it seems like majority wants to use this coupon while wearing red and not the beard or holiday sweater {heh}. In any case, soon you can print your coupon to save $10 when you spend $40 – on anything in the store. That’s great savings! Like Carol from the video would say, Go Team!

So, nows the part where I tell you what I want with my coupon {cause I’ll be using that one!}. Again this year, Zellers has the Olympic Red mittens in stores! They sold out long before Christmas last year, they are hot HOT items on many wish-lists each year. Case and point, people were selling them on ebay and getting rich off them, that’s how much people love these mittens. My plan is to use the coupon on Olympic mittens for the family, a very festive start to the holiday season.

You can use this coupon on anything – so what would you use it on?