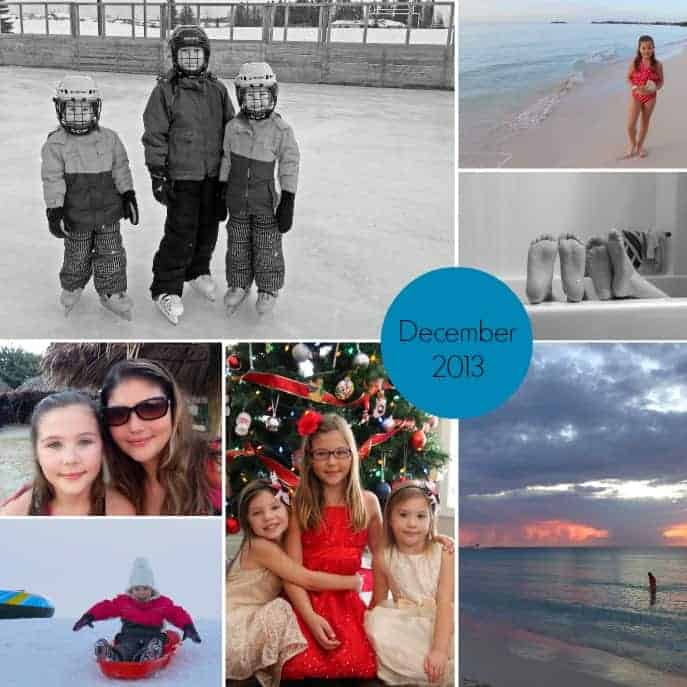 December is pretty much over already? How did that happen? This entire month seems like a whirlwind that took me along for the ride.

It started with a fantastic trip with my daughter to Beaches Negril in Jamaica. The sand, sun and ocean was the most perfect way to start the month off right.

As soon as we got back, it was a mad rush to finish shopping, baking and decorating. Due to the trip we had a late start in prepping for the holidays, but I managed to pull it all off without too much stress. Well, nothing a glass of rum and eggnog couldn’t handle!

Christmas was perfect, time spent with the family and memorizing each magical smile and squeal from my kids. The stress, rush and mad-prep was totally worth it.

Even Elfie {not pictured} came to stay about mid-month until Christmas Day. Whether you like Elf on the Shelf or not, I’m addicted to the girls excitement each morning as they find him with a huge, ‘Morning Elfie!’. Ours doesn’t get into too much of a mess, it’s just something totally fun for the kids as we countdown to Christmas. He’s their buddy and they love him – that’s all that matters! ok, and if it stops them from having one colossal fight per day, it’s a huge bonus.

Between Christmas and now we’ve lucked in with some warmer weather, opposite to the massive snowstorms we’ve suffered for the last month and a half. While I’m not a winter person {at all!}, we took advantage of the nicer weather and went sledding and {drumroll} – I taught the twins to skate!

On shaky feet, they each held my hand for about 5 minutes and then they were off. While right now they move slowly and can’t really ‘skate’ exactly, they can stand and cautiously make their way around the ice. That first time they even mastered how to get up on their own from the ice. Success!

Plus, the break from school and activities has given me a re-charge after such a chaotic Fall. Sleeping in, a clear schedule for a bit and staying in PJ’s until noon. Bliss!

Was it a good December? Absolutely!

Hope all my fantastic readers had a wonderful December and Christmas. So long 2013, bring it on 2014!

If you haven’t yet made a Month in Photos collage, January 2014 is a great time to start! You can print each month, and soon you’ll have a year in photos for an album – without much effort required.

I used to *plan* to put photos in an album or make one at least every quarter – yet my reluctance to actually do it proved to be a huge fail. While I started doing Month in Photos mid-way through 2013 and don’t have a full year, I’m still going to make an album in the next week or so, and start fresh for 2014.