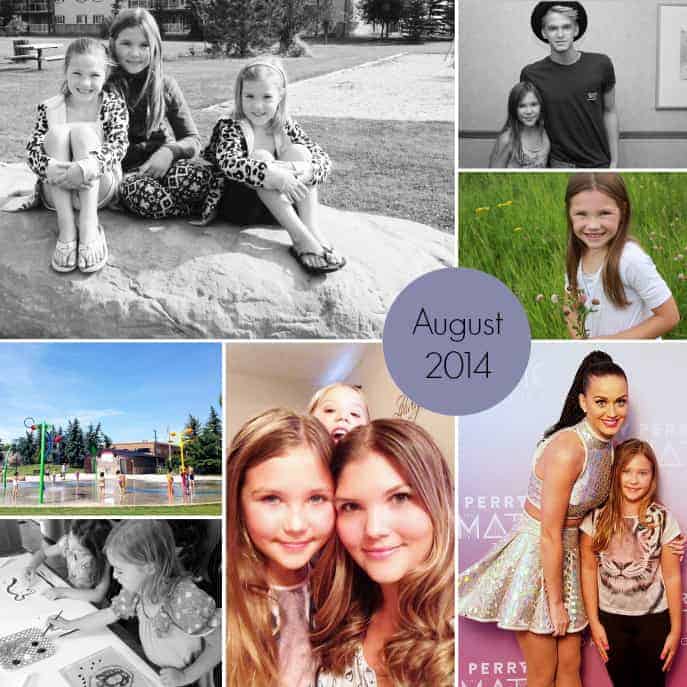 While this month has been busy and I’m trying to adapt to back to school, I’d rather believe that we are doing some wonderful things as a family lately – and there just isn’t enough time.

August was one fantastic month though and by looking at our photos, you could say that it was Isabelle’s month to shine.

You might notice that August 2014 includes a photo of Isabelle with Katy Perry! Thanks to Covergirl, we were VIP guests to her Calgary concert and got to go backstage before the show. Isn’t she just gorgeous?! Really, this woman is flawless.

Oh, and there’s a photo of myself with my girl as well. The Katy Perry concert was a mother/daughter date night so we had to selfie the occasion. Oh, and get a nice little photobomb from Katelyn.

I also took my oldest and her friend to the Big Ticket Summer concert and meet many Family Channel stars, but she also got to meet Cody Simpson and play a game of UNO with him!

So, our summer literally had a star-struck ending, fireworks and all {heh, right Katy?}.

The rest of our August 2014 was spent taking in the summer sun. It rained quite a bit this month {with one doozy of a hail storm}, so we ceased each opportunity to get outdoors. Camping, parks, spray parks, walks … ahhh summer.

In August my oldest had her choreography camp for cheer and the twins took a week of swimming lessons as well. My little water babies begged for more classes when it ended so I’m convinced they enjoyed it.

Indeed it was a busy but incredible August 2014. We only have 18 summers with the kids – and we certainly made this one count!

Did you have a good summer?
.

If you haven’t tried Month in Photos yet, you need to give it a try!

Gather your best of the month for a collage and then print each month off. By years end you’ll have a year in photos for an album – without much effort required. Voila!