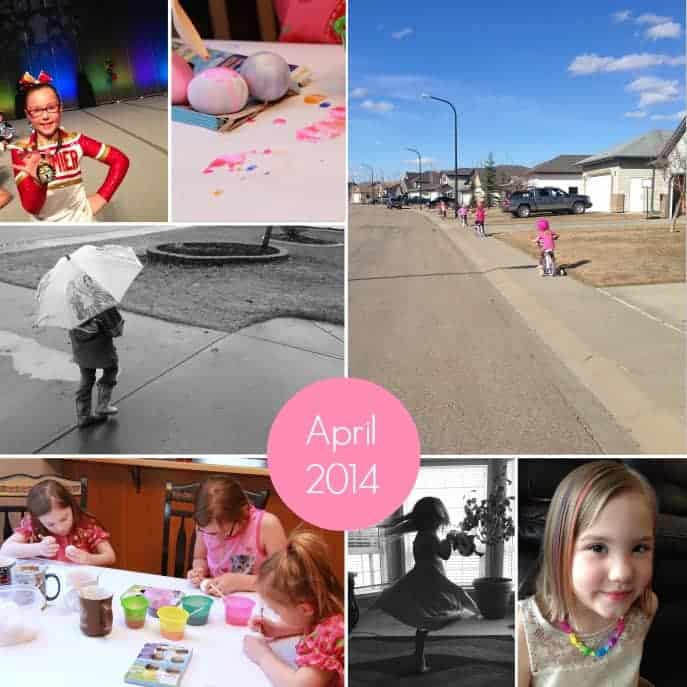 April started off with a bang as I spent some time in Mexico for a press trip and enjoyed much sun, sand and water. Yet that was just the beginning of a great month ahead – April was an entire month of enjoying the beautiful outdoors. Rubber boots were a must this Spring yet after a few days, all the snow was gone. Hooray for seeing grass again!

Easter weekend was a great time with family, even though my daughter ended her weekend with a 24 hr bug {bleh}. Luckily, I have learned a few tricks on quarantine and sanitization – she was the only one to get it. Knock on wood, I’ve been fairly lucky when it comes to sickness not passing through the entire house.

Miss Isabelle wrapped up her 2013/2014 cheer season with a competition for the record books. During their routine, they lost music halfway through, which causes a lot of teams to panic and freeze. Hers kept going without missing a beat and finished like the music didn’t stop. It was remarkable!

To those that can never tell my twins apart {even though there is a noticeable size difference}, now you really can! Miss Katie is now sporting a short sassy bob. Sophia gave a firm NO WAY in cutting her locks, she IS Rapunzel after all. I’m hoping Katie’s huge cut will kick start it into growing more, she still has mostly baby hair. You guys! I cut off baby hair!!

Oh, and then there was the time that the universe tugged on my heart. Yeah, it’s been a one!

If you have a Month in Photos post for April 2014, leave the link in the comments.

Don’t forget to print each month off and by years end you’ll have a year in photos for an album, without much effort required.