At the first signs of Spring, I watched the girls bring out their bikes and speed down the street. They still had training wheels on, and I realized that they weren’t even trying to balance – they kind of coasted on one side, leaned over and completely supported by the wheel.

“I need to take those off or they’ll never learn“, I said to my husband.

Despite my husbands hesitation, we took off the training wheels and threw them out. Just like that. My approach was the, ‘you don’t have them, so you better learn’ method.

Well, the girls had zero balance. Nada. They couldn’t even get onto their bikes and get their feet up without falling over.

This resulted in them avoiding their bikes for the next month and a half.

“I wish we had just kept those training wheels on. At least then they’d be on their bikes this summer“, said hubby.

I smelled a challenge.

My mission for summer 2014 was to get these girls riding, it was my one main goal. To be fully honest, it was my husbands doubt that was my fuel. Oh, it was on.

So, during the last couple weeks of school, I thought about how to best tackle this because frankly – they outnumber me. I asked friends and I fully admit to doing a Google search {no help}.

With the bike-strike, they were left with one scooter. Fights galore? You bet! Really? I have twins, WHY did I buy just one scooter years ago? It’s like I’m new here!

Then I remembered that Barbie had sent us a cool scooter which I hadn’t yet introduced to the girls. With happy shrieks, they jumped on it. Yet – they couldn’t ride it very well at the beginning. 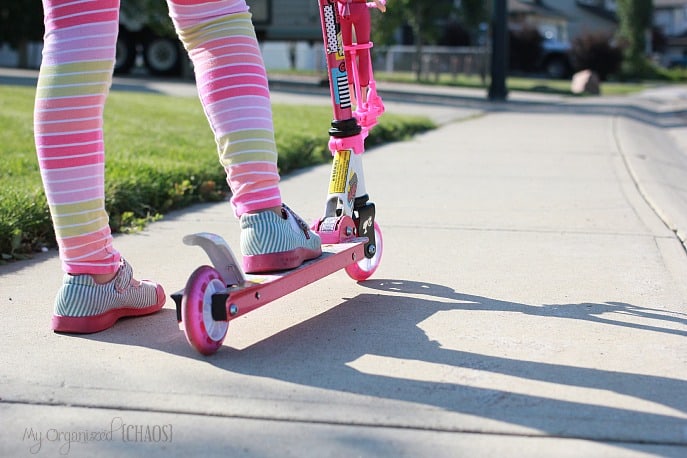 You see, the old scooter had 2 wheels at the back, whereas the new Barbie scooter just just one. Again, they have no balance on wheels and the old scooter was partly to blame! Gah!

In retrospect, parents, go with the one-wheeled scooter right off the bat. It’s a smarter design and the other does nothing for balance. Live and learn. 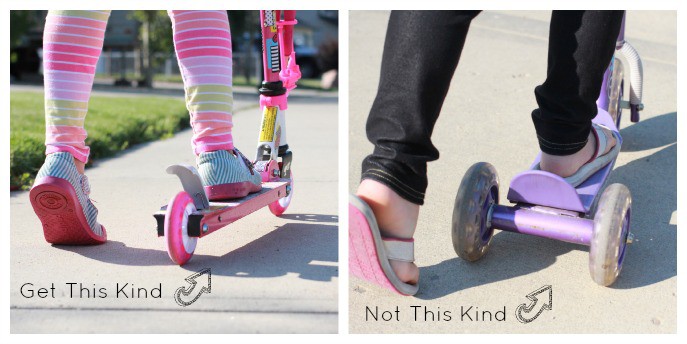 It only took a couple tries for the twins to gain some balancing skills with thanks to the new Barbie scooter. Side note, it’s so cute since it comes with a little mini-scooter for a doll friend {Insert: ‘awww, so cute’!}. 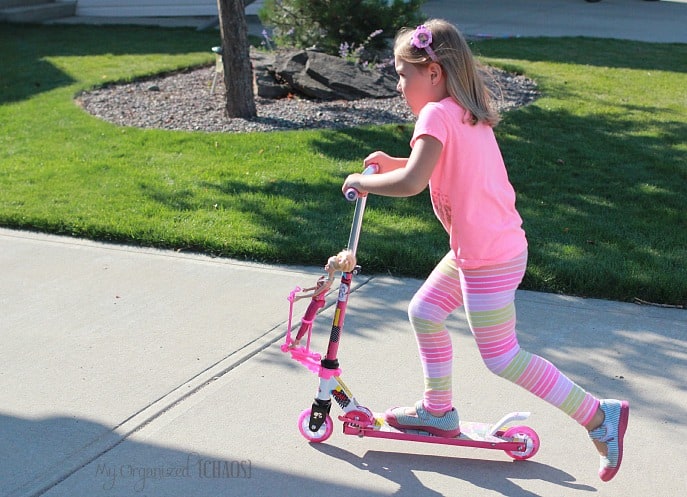 Then it was July 1st – fresh out of school and we were packing up to go to our creek property for camping. I loaded the twins bikes into the van, determined to make this happen.

After lunch that day, it was time. Now or never. The girls were nervous, ‘Mom, can Barbie come with me for this?‘ asked Katie. ‘That’s why you have a basket on your bike hun, of course!‘. She relaxed a little and off we went, helmets on and to the grassed area.

I instructed the girls to put their feet on the pedals and when I pushed their bikes forward, they were to push with their feet. They got about 10 cm and fell over. “It’s ok, get up and let’s try again“.

Back and forth I went from twin to twin, and with each push they went farther before stopping and falling. I was a sweaty mess from running back and forth from child to child, along with the heat that day – but I persisted.

They persisted, despite getting frustrated at times.

Yet slowly and surely, they went farther with each push until they could go the length of the green. By this time, neighbouring campers had heard the commotion and had placed their lawn chairs by their trailers, enthralled with the afternoon show. Pretty soon my cheers were joined with theirs.

Next I moved onto the next step. Get off the grass.

See, I did it this way because not only is grass better to fall on, but it’s harder to bike on it. So, if they can master biking on grass, it’ll be much easier to bike on packed gravel. 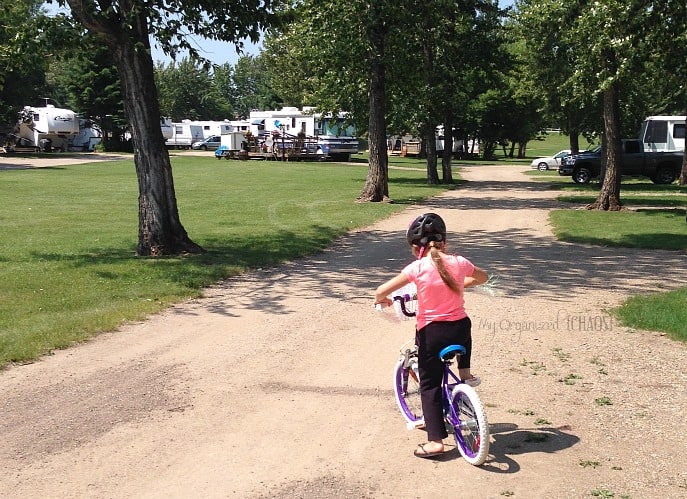 Once the girls moved over to the gravel road, it was much easier for them and they just took off! My cheeks hurt from smiling. They were so proud of themselves. 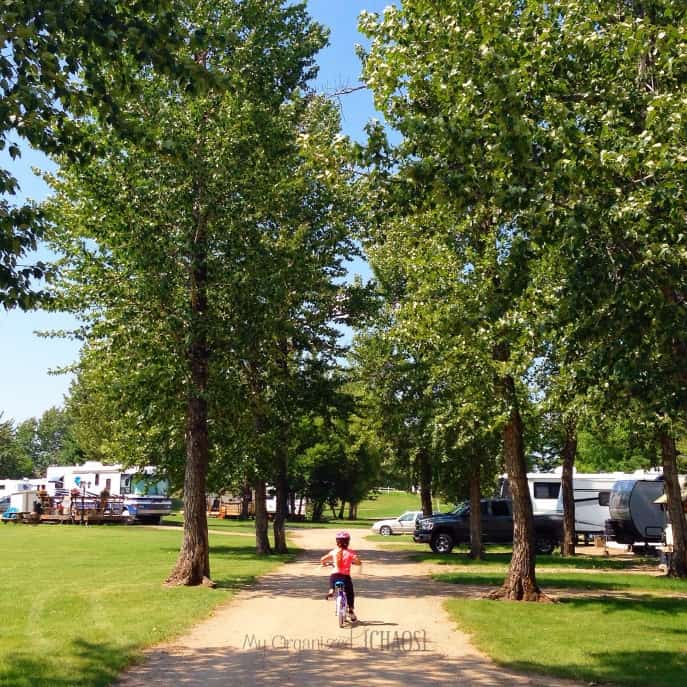 My little ones, cruising down the road, with Barbie bouncing in their baskets with them. It was a sight that I’ll always remember, and I’m pretty sure there was a young Tammi that did the very same thing years ago. Bikes and Barbies. They were a summer tradition, and a perfect pair.

It took more time for the twins to learn to fully get going on the bike without me pushing, yet that came all on their own with practice. After they gained the balance and confidence to stay upright, I stopped giving them that initial push and at times it took them numerous tries to get going. But, they did learn to start and keep the momentum, all on their own. 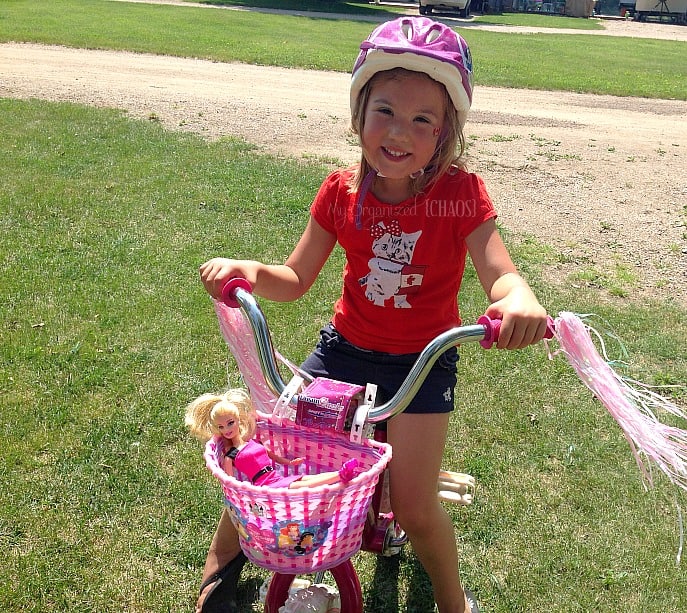 The first days of summer 2014, I met my main goal. The twins now ride their bikes and after 15 years of being without – I bought one too.

Together, we’ve been riding through our neighbourhood all month long. It’s a new kind of freedom, having all your kids ride their bikes solo. It’s new world of adventures and fun.

Through this my hubby learned not to doubt his girls or his determined wife, and I learned to not be intimidated by a big parenting job x2.

The girls? Well, they learned that they could do anything, especially with a little help and support from family and friends {even from those smiling at you from the basket or at the front of your scooter}.

We’d love to hear your own #BarbieProject story. Share what you see, hear and feel when your child plays with Barbie! Visit http://barbieproject.com 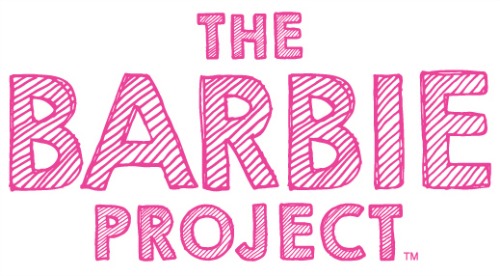 I am apart of The Barbie Project and I receive special perks as part of my
affiliation. The opinions are, as always, my own. . .