After a blissful Long Overdue Girls Day with my Isabelle, let’s flash forward to Sunday. My lovely weekend was about to take a complete 180. I had to face damaged photos!

The girls were watching old VHS tapes they found in a storage bin, when it occurred to me that they hadn’t seen the REALLY old ones from when I was a teen. They loved the suggestion that I fetch these tapes and we snuggle in and watch them before I made dinner.

So, down to the basement  I go, knowing the box was underneath a shelf in the laundry room. Dark and cluttered {wish we had a bigger space there!}, I stuck my hand beneath the shelf and started to grab the small beverage cooler that was on the box, to move it out of the way … Something gooey. 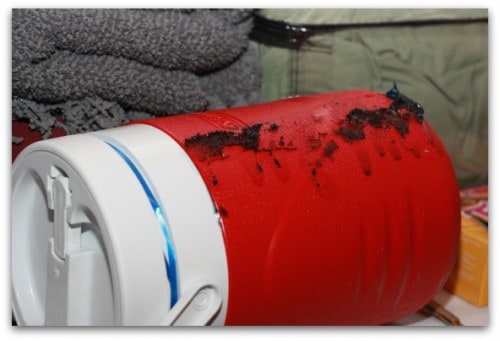 I brought my hand closer to my face and immediately recognized the scent of the ‘goo’ – liquid laundry soap.

I looked above the shelf to another, where all my extra bottles of laundry soap sit. I stood on a camping cooler, picked up the first bottle I see and it’s almost empty. It has a little puncture wound on it’s side {did someone throw something on it?}.

I pushed aside a couple more bottles to discover that the soap had leaked all over that shelf, rivered down to the next and covered coolers and extra serving bowls. Then, it drained down the wall, right to all those cardboard boxes which lay on the floor. Damn you, Costco size laundry soap!

OMG, some photo albums are in one of those boxes!

Sure enough, I pulled out a box which I knew had OLD photo albums…. 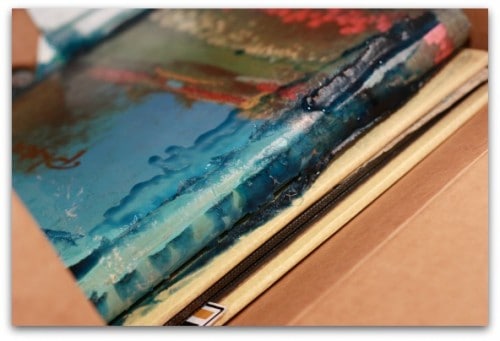 pssst, this is the part where you insert those choice curse words. I know I sure did.

Hit by the blue river of doom were the 2 photo albums from my childhood, from birth right to age 10. The ONLY ones that exist.

I tried wiping off some of the liquid but it seemed like it doubled the more I wiped. Do you know how hard that stuff is to clean up?! They dont’ say ‘100+ washes’ for nothing! 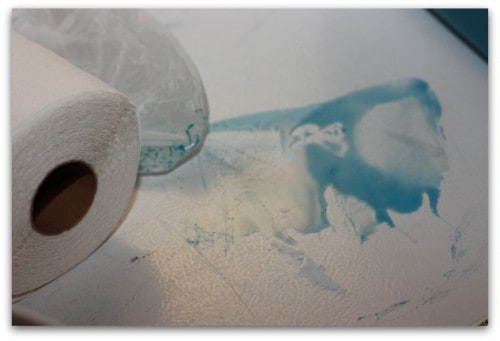 At this point I didn’t cry {though I did swear, a lot}. I left the laundry room in shambles and played with the kids for a while. I just needed to get away, to feel dumb. I needed an out.

After a while, and a trip to the store to get extra storage totes, I went back to the mess. Here’s where I realized a couple things;

It took hours, but I managed to clean up the spill. Worst. Mess. Ever. {even compared to the time the twins had a poo party. Just ‘sayin}. I took the remaining photos and transferred them to new albums and they are safe {for now} in sturdy storage bins.

Yet, one particular photo was ruined – the most precious photo of all.

This was the one and only photo of my parents, myself and my 6 siblings. The ONLY photo ever taken of us all together. 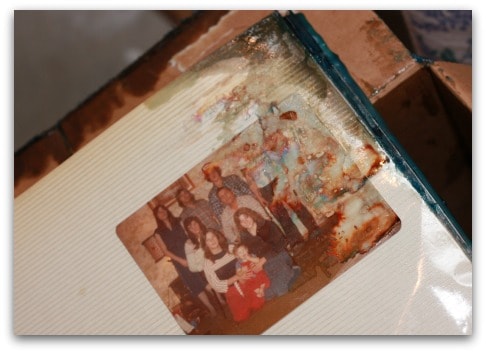 This is the point where I did break down in inconsolable tears. I apologized to my parents, and
wished they were here. Wishing I had made a copy. Why? WHY?

I have to keep the gratitude in mind, that so many photos of my childhood were salvaged. But I think of this one photo, taken when all my family members were alive and we were all together. All I had left of ‘us together’ was this one photo, and unfortunately I can’t say that I still have the memories, since I don’t.

Let it go and move on. What’s done is done.

But, obviously I still need to work on this ‘organizing the chaos’ thing. 🙁