I guess it’s a no-brainer to start off this post with a ‘I use computers .. a lot’.

But it’s true, and because of that, I’m very picky and have a huge list of demands when it comes to PC’s or laptops. First and foremost, it’s gotta work on the fly. Meaning, fast and ferocious, if I only have 10 minutes to get some work done before chaos hits, I need the most out of those 10 minutes. So, a fast start-up and no lag or drag is key.

Another must-have that goes along with speed and performance is memory. I take photos by the thousands, store files by the case-load and while I do use external hard drives, I like to keep a lot of things on hand. Meaning, right at my fingertips. So, my computer must handle that need for storage. 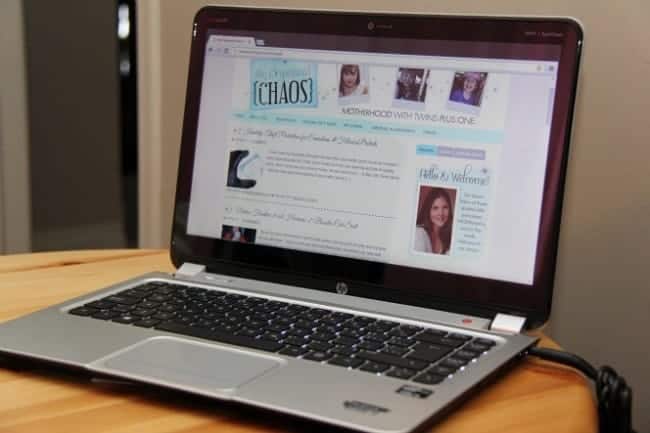 First and foremost, are the biggest features as I see them:

For those that love tablets, you’ll appreciate that it’s touchscreen. Games, and all the beloved apps you can handle, are literally at your fingertips. New to Windows 8, I’m still trying to master the navigation, yet so far I love the ease to jump from app to app and hide many windows for later viewing.

While I’ll always be more of a keyboard girl, some features are definitely nice to use via the display, it’s definitely not meant to replace the keyboard but be a nice addition. One thing I do love about Windows 8, is by one simple click of the Windows key, it switches from app view to usual desktop view, and vice versa. As well, no need to hunt for apps or files, you just start typing the name and it comes up.

While the HP Envy TouchSmart 4 is so thin and weighs just just under 4.5 pounds, it still has a 14 inch display and an aluminum body. So, it’s easily mistaken for a ‘regular’ sized laptop until you take a good look at the design. It’s very easy to slip this laptop into a bag that isn’t specifically designed to hold a laptop. Compared to other ‘thin’ laptops like the Macbook Air, the Touchsmart 4 feels more solid and sturdy.

One really cool feature I have grown to love in the HP Envy TouchSmart Ultrabook 4 is the illuminated keys. Oftentimes I work just as the kids are falling asleep, and don’t want bright lights on in the house until it’s safe to do so. So, I love that I can keep my main lights dim while still being able to fully see the keyboard. If illumination isn’t your thing, just press F5 and the back-light disappears except for a couple keys that remain lit.

Right on the keyboard, there are keys for easy access for: brightness, volume, media playback, wifi, PgUp/PgDn and more. Again, referencing Macbook Airs once again, HP has ‘the sides’ beat, hand down. Included is 2 USB 3.0 ports, a USB 2.0 port, full-sized Ethernet and HDMI ports, mic and headphone jacks, and an SD card reader. It also has a HP TrueVision HD Webcam with integrated dual array digital microphone.

The large touchpad is something I’m still trying to get the hang of. It’s made to support Windows 8 gestures, so once mastered, you can use ne finger or two {single clicking or double clicking} in corners to emulate actually using a touchscreen. I hate to even touch on this right now, as it’s still something I am trying to get used to. One nice perk is that by double-clicking the upper left of the keypad, you disable it entirely. The indicator light will show that it’s disabled and then no light when it’s turned on. Sometimes I’m so into the keyboard-groove that I don’t notice I’m slightly touching the touchpad, until it’s moved the cursor and everything goes wonky in my text. I really like this feature when I’m writing. 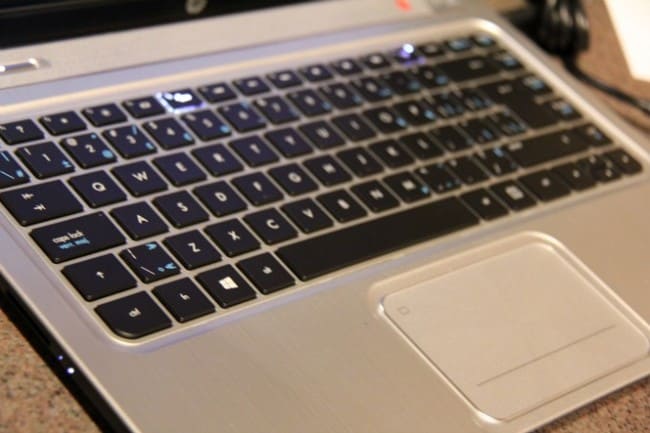 I’m one to always keep a laptop plugged in unless travelling, so I haven’t tried out the battery life quite yet. I’ve read that you’ll get about 6-8 hours on a charge {depending on what’s running during use}, which is average. Not a massive plus, yet enough for any of my needs. I’m hardly ever without an outlet, after all.

Now, you can get the standard version of this laptop as well, one that is a Core i3 CPU, no touchscreen, no backlight etc. This, of course also comes at a pricetag less about $100. Yet, you know I’m all about ‘go big or go home’ and if the day might come when you’ll wish you had more memory, more features etc, it’s just better to get it all from the start and save the later headaches. This is especially true with memory, load ‘er up, everyone always needs more at some point. 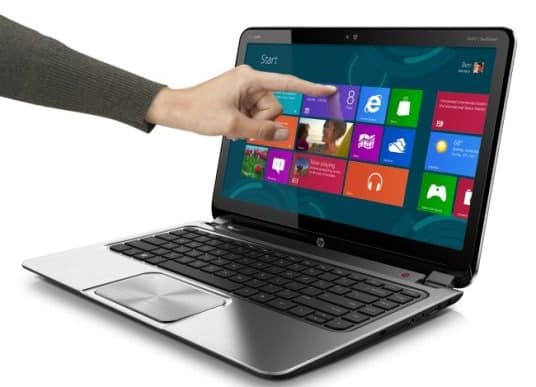 If I had to point out one thing kinda cringe at, it would have to be the cooling fan. While it’s defiantly quieter than other laptops and PC’s that I’ve had, it’s not as quiet as I thought it would be. Usually it’s a very gentle hum that goes unnoticed. Yet sometimes it revs up for a short while, which is a bit unnerving. Luckily, I do have a cooling pad, which might help to use. Now if only I could remember where it was…

Things I appreciate with every use? Fast start-up and shut down times. There’s also no lag at all when I’m jumping from app to window, program to file, photo to web page. I also believe I’ve only chipped away at a bit of what this laptop can do, each day I discover a new shortcut and another awesome app to crush over. From games for the kids, to using it for 2 businesses, it’s proved to follow along with me and my hectic pace. This, my friends, is tops to me.

You can order the HP Envy TouchSmart Ultrabook 4 directly from HP or at retailers such as Costco or Best Buy.

WIN IT: One My Organized Chaos reader is going to get a HP Envy TouchSmart Ultrabook 4, the exact same one I received from HP. ARV is $950.00

TO ENTER: Fill in the form below with your qualifying entries. Good luck!