We have an entire cabinet overflowing with board games, yet we’re always looking for more to add to our collection. We use them throughout the year; whether we play as family, with guests or classic fun for the kids. It’s a great opportunity to unplug, visit, connect, and simply have a change in routine. Unless you routinely have game night and in that case – great for you!

So, it may come as no surprise that board games are top gifts to give at Christmas, they are just one of those items that people rarely buy for themselves despite meaning to.

You can bet that HASBRO released some new games in 2015. Here’s just a very small sampling of new HASBRO games perfect for gifting, rather than daunting lists, let’s keep it simple. These three would cover fun for the entire family!

The fast-trading property game of MONOPOLY meets the power of snow and ice in the MONOPOLY JUNIOR: Disney Frozen Edition game. Kids can join Anna, Elsa and Olaf as they travel through Arendelle and buy its most magical locations. Play as Anna, Elsa or Olaf and whoever collects the most money wins! MONOPOLY JUNIOR: Disney Frozen Edition game includes one game board, three character movers, 24 Chance Cards, 36 Character Markers, 90 banknotes, and one die. Available at major retailers across Canada.

Unlock the fun in this electronic version of the original guessing game! Players select a character, then lock their selection into place using their game lock. Take turns asking your opponent questions to eliminate characters. Close the doors on the board as you get closer to guessing your opponent’s character. Make your final guess by placing the key into the keyhole to unlock the winning tune. The first player to guess their opponent’s character and hear the winning music wins the game! Available at most major retailers across Canada. Two “AAA” batteries required, not included.

JENGA QUAKE Game
Age: 6 years & up/Players: 1 or more/Approximate Retail Price: $27.99
The classic block-stacking, stack-crashing game of JENGA is getting a shake-up! In JENGA QUAKE, players take turns carefully pulling out the brightly colored JENGA QUAKE blocks one by one from the tower. The excitement and suspense builds as the tower randomly vibrates and rotates during play. Keep calm and a steady hand to be the last player to place a block on the tower before it collapses! Requires 3 “AA” batteries, not included. Available at most major retailers across Canada. 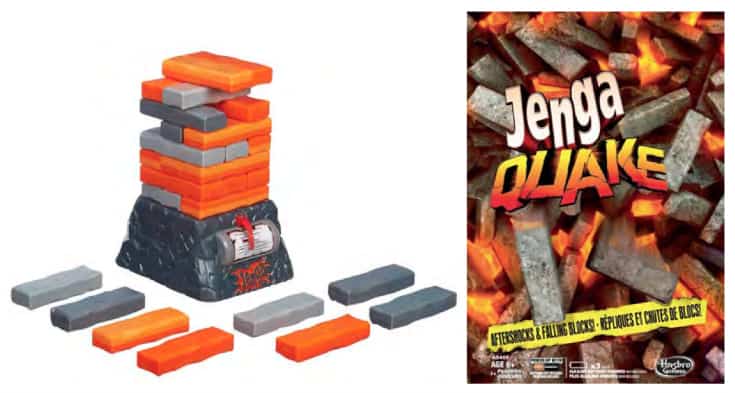 Who on your shopping list would love a new HASBRO board game?

WIN IT: One Canadian reader is going to get all three {3} of the games from HASBRO!

TO ENTER: Fill in the form below with your qualifying entries. Good luck!

Disclosure: Hasbro sponsored this holiday giveaway to my readers, all opinions are my own.