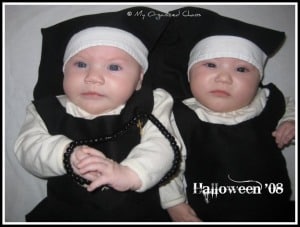 When September comes around, my thoughts are filled with everything Halloween, I love Halloween. Especially since having kids, I just adore the entire day on Oct 31st, all because of halloween costumes

And yes, I sneak the candy, and lots of it! 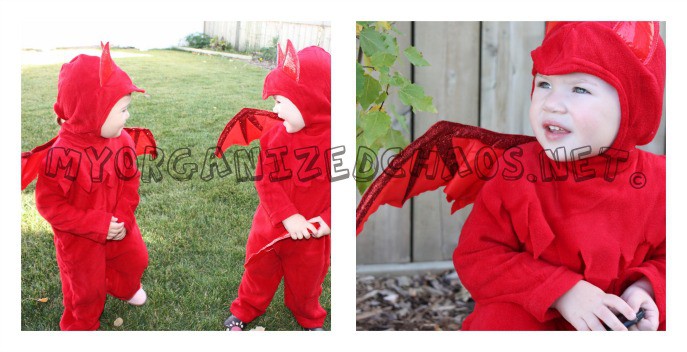 I wasn’t going to dress up the Twins last year, I thought they were too little and thought, ‘why bother?”. Then, on the day before Halloween – I was consumed with guilt. I thought back to Isabelle’s first Halloween and her costume, and knew that the twins just needed something…anything. Plus, they needed to celebrate with Isabelle.

So, I quickly tore through my scraps of fabrics, and managed to whip up little Twin-nun costumes

{Get it?…. ‘Sister Act’ – HA!}.
Really, I had to make them so fast that the seams were crooked, and the cut was awkward. But, I pulled it off just in time. Looking back, I am so happy that I decided to dress them up. What was I thinking?! All the girls were the center of attention at the mall, and with friends and family.

So, this year I’m not panicking about shopping and preparing the week before Halloween. I’m doing some planning early.
Hmmm…

What should the kids be this year??

I’d like all 3 kids to coordinate somehow…be a ‘theme’. The Twilight fan in me really wants the Twins to be the lion and the lamb {wouldn’t that be cute!}

But, my oldest daughter refuses to be a werewolf or a vampire! Plus, Hubby lectured, “Their costumes are for them, dear – not you” {Boo!}

*But Remember:
these ideas can be applied any family with more than 1 child*

… and remember that Pokemon Costumes

are HOT this year!

I know it’s a lot of choice, but first make the decision if you’d like to make the costumes or purchase them. And, pick a costume that suits the outdoor temperature!
Next, consider limiting it to a group:
~ Animals
~ Objects
~ Food
~ Superheros
~ Celebrities {on-screen or music}
~ Cartoon Characters or Nursery Rhyme

I have mine narrowed down, yet still debating on the final ones.
Hubby thinks I should dress up to and make the kids and I the 4 members of KISS.
That one is not gonna happen! {but would be cute!}

Does anyone have any more ideas?
What are your kids going to be and are you going to make the costumes or purchase?