One evening after dinner, one of my twins turned on the docking station in the kitchen and madly pushed buttons on my iPod. She landed on a song that made me stop in my tracks.

“I know Mom”, not looking up from her book as she sat on the couch.

“Yes Mom, you’ve told me a million times”, Isabelle mumbled, still fixated on the pages in front of her.

My excitement came to a halt and I studied my just-turned 10 year old.

I closed my eyes and was brought back 10 years and to a previous house. It feels like a thousand years ago, yet just yesterday at the same time.

I started swaying back and forth to the song, eyes still closed, and let the memories take me back. 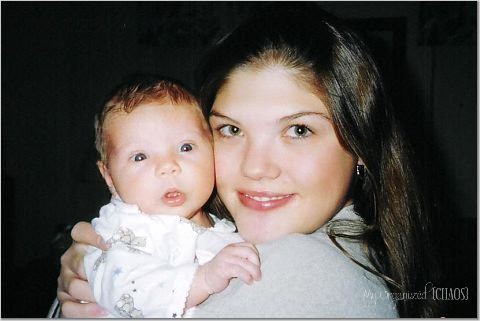 A new Mom, tired and zombie-like, trying to soothe her baby girl. The memory isn’t of a particular night, since each was the same. 2am. 3am. 4am. 5am – it didn’t matter except for the fact that this mom felt like she was the only one in the world that was being kept from slumber.

She stared out the window at the blackness of night, and felt so alone. So alone and so tired.

The new Mom tried to soothe her newborn with music, turning on the top 10 hits on the radio. Or was it the music channel on TV? So much is a blur, but there’s one definite.

Breakaway by Kelly Clarkson was at the top of the charts during this point in time, and a song that kept the new Mom {and her baby} company through the night, for possibly months.

Memories of that time are still so vivid – In PJ’s, swaying back and forth, singing and dancing softly with a warm bundle in arms. Yawning, sobbing, and wishing for sleep again. Unequivocally haunted by the past, feeling intense fear of the future, and this new life that kept her up at insane hours. Or perhaps it was just the exhaustion that brought on the fear, was it even there at all? Her mind was obviously a mess.

The only known was that it was just her and a newborn, and their song.

Back to the now, I open my eyes mid-way through Breakaway and tears spill fiercely down my cheeks. Listening to it now, this song was so applicable to that moment in time. Growing up, pushing forward, and finding strength when it seems like there’s none.

Breakaway got me through so many nights with a newborn and to this day hearing it, instantly brings me back no matter where or when it’s played. Back to a time when a new Mom and her baby danced together in the middle of the night – just trying to get through it all.

I wipe away the tears and smile, knowing that we made it through that difficult and chaotic time. 10 years! It’s almost unreal to think of the time that has passed and the life that surrounds us now.

I ask my Isabelle to dance, yet am met with a sassy 10 year old eye-roll and a shake of the head as she turns the page in her book.

Our song ends and after only a short pause, a new one begins. My heart.