It’s be an exciting summer for the people with Magnum Ice Cream. Not only for the exciting official launch of the decadent ice cream bars in Canada, but for the Magnum Heir Contest. As you may already know, the contest is now closed. I hope you all had a chance to vote for your favorite videos selected for the top 10 spots! I personally enjoyed watching all the videos, such creativity and passion in them all. Each one really captured the meaning behind, “A day without pleasure is a day lost“. I wish there could have been a whole Magnum harem, alas there can only be one Magnum Heir. The heir will get one year as a VIP with cash, chauffeurs, chefs, travel and more.

Here is an exclusive video from Ivanka Trump, congratulating the lucky winner.

And without further ado …. the winner is … Shawna Howson
Congratulations Shawna!!

Shawna Howson. a Cambridge, Ontario native was among the top ten entrants as chosen by Magnum’s panel of judges and ultimately named The Magnum Heir based on votes for her video entry at www.facebook.com/magnumheir. Shawna created a quirky and humorous nomination video and it features her playing herself and two odd-ball characters of her own creation – Banana and the Baron Von Crazy Cone, who tries to usurp Shawna’s heir title. The new Magnum Heir makes her debut this month on the red carpet at one of the hottest movie premiere after-parties of the festival in Toronto. More than 360 hopefuls, submitted their videos demonstrating why they were worthy of a lifestyle that defines pleasure for one year, with access to private chef and limo services, glamorous vacations, a Holt Renfrew make-over experience, cash and more – valued at $250,000.

The Magnum Heir contest may be over, but there’s still nice days to enjoy Magnum Ice Cream bars. Even in the frigid winter, I know I’ll be curled up at some point {or 10}, with a Magnum! Mmmm! 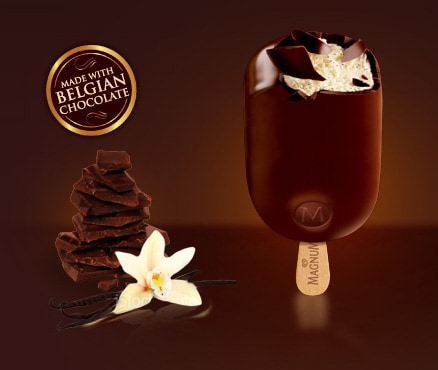