Social Media and a smartphone, kinda like peanut butter and jelly, right? Yet, it’s not that simple considering that there are so many models of smartphones on the market. Like any other customer looking for a phone that works for them, you weigh the pros and cons and kinda hold your breath even after you make that purchase. It’s so frustrating that ‘playing’ with any phone for 5 minutes isn’t going to tell you everything that you need to know about that phone. And, you always question whether you made that right decision…. 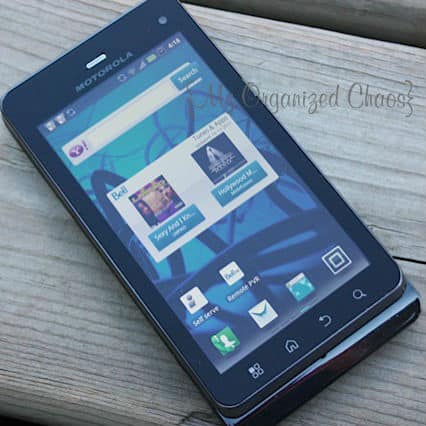 I had the opportunity to get the new Motorola XT860 4G‏, runs on the Android Platform {OS 2.3}. That really means nothing to me, all I know that it’s different from the iPhone I own, yet not as hard to ‘get to know’ as other phones on the Android Platform. Oh, did I mention I’m not a techie? Sorry if you stumbled here for a full innards mock-up, comparing the device in terms of processors and operating systems {those 2 are different terms, right?}. Yet, I am a wife and mom of 3 who works from home and relies heavily on a smartphone for mainly social media, when not at home in front of laptop. So, this review will be from my viewpoint, no techie specs in this review!

These are the basics of the Motorola XT860 4G‏ as I see it:

It has a slide-out full QWERTY keyboard, yet also has a 4-inch qHD touchscreen display. I do know that it has been called the “World’s Thinnest QWERTY Slider Smartphone” and when comparing between the iPhone, it is thin! Yet, it’s also a little heavier too I notice. Since I am fully used to the iPhone, I don’t use the QWERTY keyboard much and prefer to use the touchscreen. Maybe slowly I’ll get adjusted, yet even if I don’t, that’s alright too. I do like both options though, it really widens the consumer base based on keyboard preferability.

Being a shutterbug {who despises the camera on the iPhone 3G}, I love the 8 megapixelcamera that can also record 1080p HD videos. Plus, it has the front-facing camera, which is a blessed feature in itself for taking photos or for video-calling. I actually think there’s a special place in heaven for forward facing cameras on phones, once you get used to having one, you just can’t go back!

Speaking of cameras, you know I have to get this out of the way right away. The camera was way better than my iPhone, yet not the best I’ve seen. Yet again, coming from a terrible iPhone 3G camera, I was happy to see how great the photos were. Bright, beautiful photos and video {featuring a LED flash too}. The above photo was taken using the landscape option using the camera on the Motorola XT860 4G, during our recent trip to Banff National Park‏. Swoon!

The graphics on the phone are bright and clear – actually, extremely impressive. For those gamers or those who like to pass the time playing games on a phone, this one is for you. The Motorola XT860 4G‏ comes with pre-built games, and I have to admit to spending *some* time playing golf.

So…. why do I pen this phone the ‘Smartphone for Social Media”?

Simply put, it has over 200,000 Google apps. Yet, they aren’t the run-of-the-mill, line ’em up and watch them shake when you try to delete them, apps. These are smarter than that, they …. dare I say, communicate? See, I added my Twitter and Facebook accounts to the phone and a strange things happened, they started sharing info with each other – how very social of them, right?

I hadn’t even entered a name or number in my contact list yet {and yes, I connected FB and Twitter before anyones number. you caught me!}. Then, when I went to my contact list, everyone from FB and Twitter was there! So, if you have your phone number set to public on Facebook, I now have it. Now, that saves time and is kinda cool – yet at the same time, I found that a little annoying to be honest. See, I’m not one to hop on my cell phone and call a twitter contact. I call local people, people I know. So, to sort through 1000’s now, was almost painstaking. And, there might be a way to fix that, or add folders – but I couldn’t figure it out. And, since it’s a new phone, Google searches aren’t much of a help as yet.

Yet, I have to say that going from apps is so fast and simple. As well, sites load fast, you can share photos instantly … yes, it’s a social media match made in heaven. Yet, in short I can’t help but to think if it’s almost too much, too smart for my uses. If I don’t use the QWERTY keyboard and feel I can’t easily find my dentists’ phone number, is it the right phone for me?

Ultimately, I’m not discrediting this phone, not for an instant. I come from a bubbly iPhone and a kid can operate that thing. It seems a little frustrating at times, yet I don’t think I’m done with you, XT860, go easy on me please. Sometimes it takes more than a few weeks to make friends with a very smart {and social} phone. And, I think once I learn more about the phone I’ll feel like I can tame the wild horse. Or, it just might take me to the next level. And, I’m happy with either.