Recently, I had the chance to review a 2012 Ford F 150 Harley Davidson truck. At first glance of this bad-boy, a big silly grin came over my face. Indeed it’s one sweet ride with top-notch luxury features, so you can bet I had fun with my new ‘baby’ during it’s time with us. 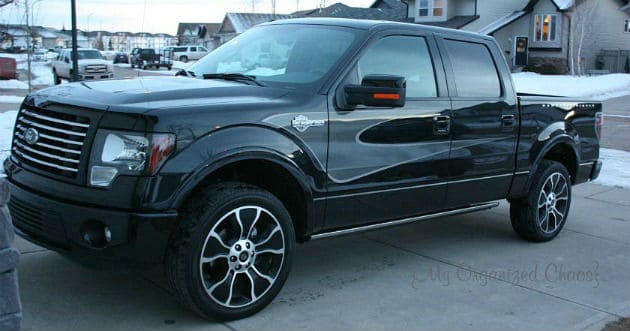 First off, know for techie and mechanical reviews – this is not the place. If hubby had been home during my test-drive, I could have convinced him to sing the praises for this review in a more manly-type grunting feature. Alas, this Mom of twins plus one must remark on it’s fit with the family. Everyday life. You know, how comfy I am and the pretty color. {even I’m rolling my eyes at that remark} 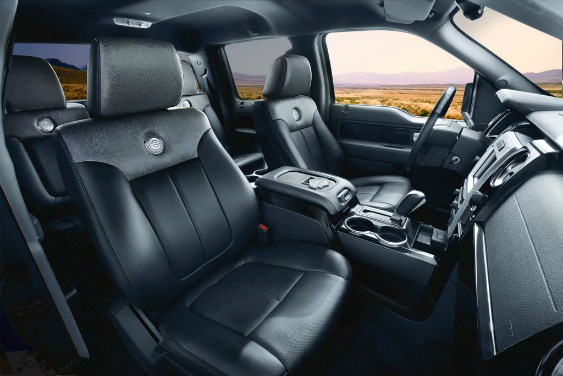 I’ll start by recapping my 2011 Ford F150 Platinum review from last fall since it does have many of the same features I became fond of: A mean machine that navigates in town as well as it does off-road, fitting the twins plus one and 3 car seats. Check out my review if you haven’t already, I was indeed impressed at how much this truck could easily be a family vehicle. 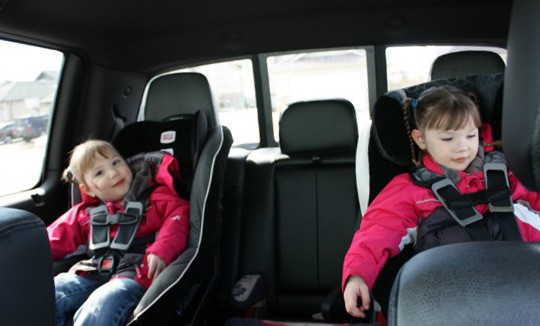 I guess you could take my F150 Platinum review and literally raise the bar to reach the 2012 Ford F150 Harley-Davidson. It’s packed with the same glorious features as the Platinum {back-up camera, pick-up box extender, tailgate step, sunroof, power pedals and steering column, power deployable running boards, Ford SYNC system, SONY audio etc}. Though I’m not mechanic by any means, I did notice that it packs a more powerful punch. With a noticeable meaner sound and, wow, it goes! {6.2L V8}

The 2012 Ford F150 Harley-Davidson, being the top in it’s class of trucks, is truly made for luxury as it is for function. It really has some striking add-ons.

Outside you have the HD badges announcing itself {hello bad ass!}, painted accents on the body and 22” machined aluminum wheels. Inside, the high-gloss Tuxedo black interior compliments the outside color and kinda makes you want to polish it all the time. The dash and trims on the seats are snakeskin leather, which as a side note is wonderful to have on the dash – ahem, dust doesn’t show! 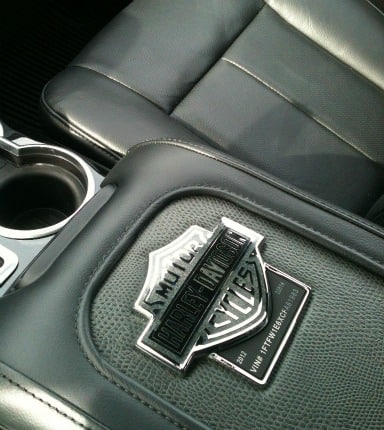 As well, you have the Harley-Davidson badges on the sidestep and a limited edition serialization Harley Davidson plate on the centre console. Nice touch! Actually, there is huge and impressive attention to detail on this truck, just like ‘pickiness’ of the HD bike owners I know. So, when I read that nearly every member of the Harley-Davidson F-150 team at Ford are themselves, Harley-Davidson owners – not surprised. They really did a great job at marrying the brands.

“This is a great pairing of two icons of the open road; Ford and Harley-Davidson. Both brands appeal to truck owners and motorcycle enthusiasts alike,’ said Marc Lapine, Ford F-150 marketing manager Ford Motor Company. “For 2012 we worked with Harley-Davidson to continue to push the styling envelope while still delivering the durability and power that F-150 is known for and that our collective customers expect.”

If I could drive this truck again, I wouldn’t hesitate in a heartbeat. In fact, my husband was disappointed that he wasn’t home during the time I did my test-drive. Really, this is his #DreamTruck. I have been hearing about the Harley-Davidson line of trucks for years and this was my first time driving one, and now I understand the interest/awe. At every angle you are reminded that it’s a Harley-Davidson and someone perfected every piece of it, right down to the HD greeting on the screen when starting the truck.

I can honestly say, that silly grin lasted right until I had to give the truck back! 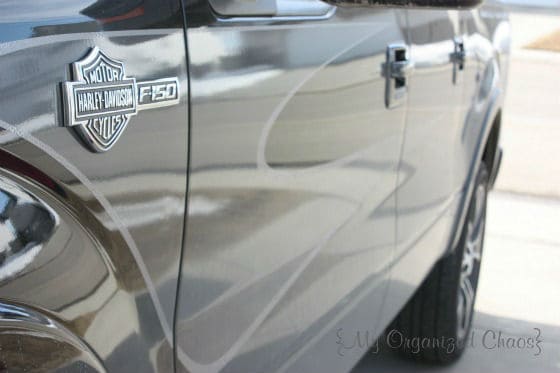 New to 2012 from previous year: Though I didn’t test the feature, the 2012 line {Lariat and up} have Hill Start Assist. This is a new automatic 4×4 system that detects if the vehicle is on a slope. When the foot is taken off the break, it has a 2 second system pause giving you time to press on the gas. Especially important when towing, this prevents vehicle rollback and lessens the stress on the vehicle. As well, 2012’s have cooled seats as well as heated. Bring on Summer!