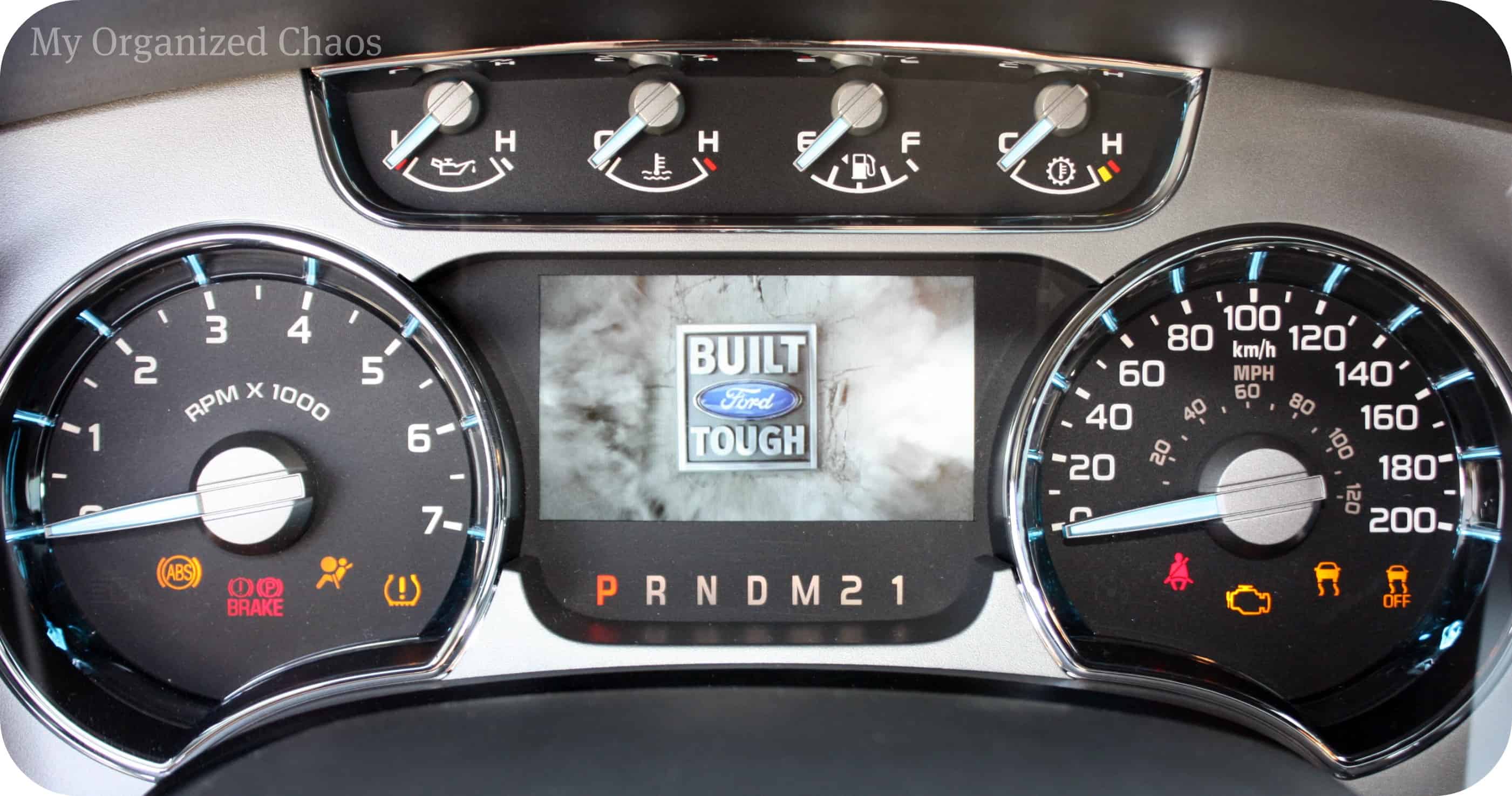 My family has always been a family of trucks, I even had my very first driving lessons in my father’s pickup. In the last number of years alone, we have owned many Ford trucks, my husband preferring the F350 Super Duty for work purposes. When I was offered the chance to review a 2011 Ford F150 Platinum for my own driving uses for a couple of weeks, I was game.

My perceptions prior to this review are worth a mention. You see, we have had a couple F350’s in our family for a number years, yet I have only driven the truck a handful of times. As much as I have confidence in my driving skills, the F350 Super Duty is one gigantic truck, which is really intimidating for me to drive. The size alone, compared to what I am used to driving – is enough to make me cringe. I guess since we have always had the biggest lineup of trucks, it didn’t occur to me that they could be anything other than a ‘work truck’. And, I never even considered the whole family hoping into it, we always just choose the minivan. I think it boils down to the fact that I always considered it ‘just a work truck’ and not something that would be family friendly. 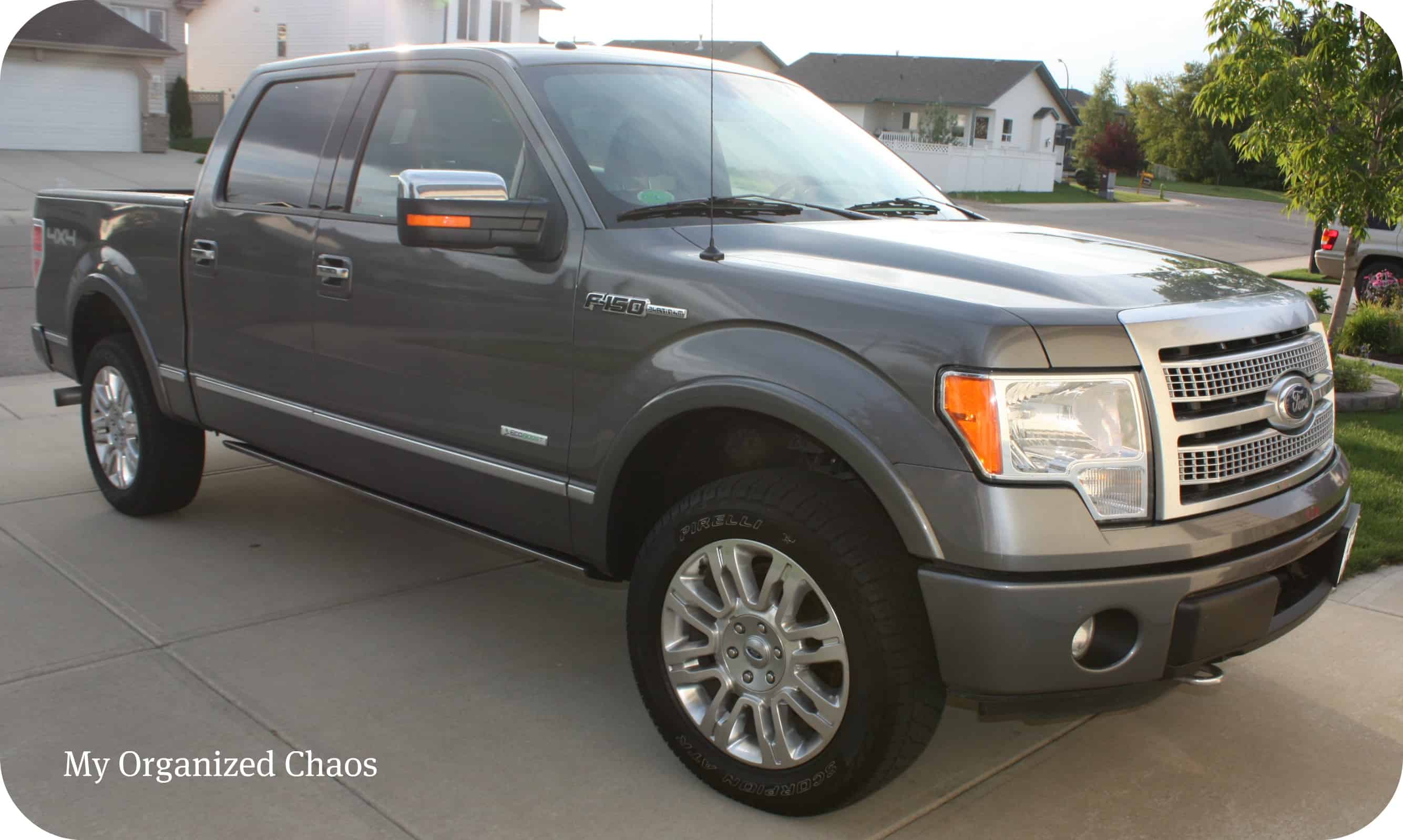 {side note: the F150 Platinum that we drove, pictured above, is the same color as hubby’s F350. Matching trucks. Cute, huh? Ya, I thought so too}

Always important to me when choosing a family vehicle, is the room for the entire family and all that essential stuff you pack along as a parent. Indeed I was impressed when all 3 of my car seats {2 for the twin toddlers being so generous in size}, fit side by side on the back bench seat. And, it wasn’t so crowded that the 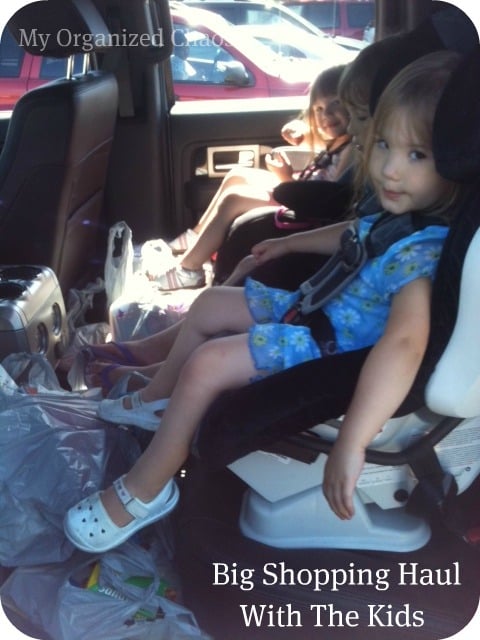 girls fought over space either. In fact, the twins on the outer sides absolutely adored having their own windows to look out of. This fact wasn’t really something I would have before considered such a positive, yet it really turned out to be one huge aspect which made driving easier. How so? In every other vehicle {van or car}, they took the back row, never getting a full sized window that could open. In the F150, since they were all at such a higher height, they were able to see everything around them, even outside. One unexpected plus that I didn’t see coming was the fact that having their own windows and being able to see the world around them, really kept them entertained and quiet. Seriously, I have never had less fighting in a vehicle than when we drove the 2011 Ford F150 Platinum truck. And, I’m sure all those parents out there will be reading this and nodding their heads in agreement, at how much having the kids happy in a vehicle, makes or breaks the experience. 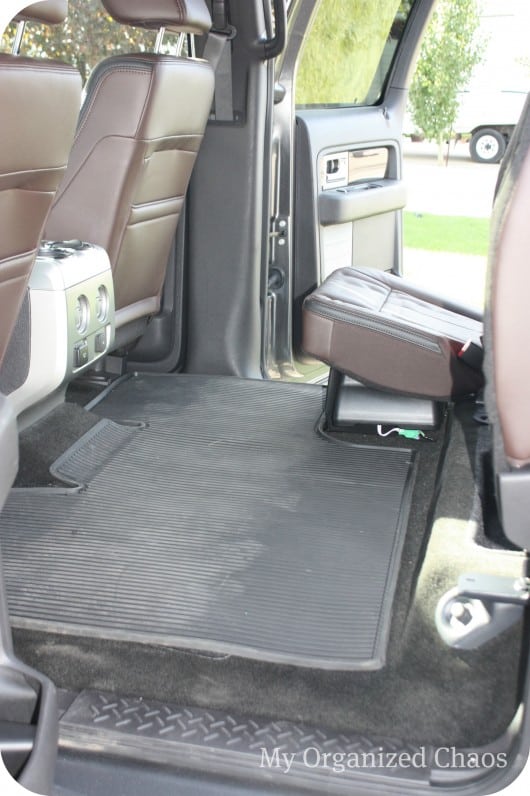 Even with the 3 seats all in row, there was still plenty of floor room to pack boxes, bags or what have you. There really is a lot of room in the entire cab of this truck! Of course if you have one less seat to occupy or are able to flip up all seats – the room inside is quite astounding! This makes me really happy since I had assumed that my only option, was to store bags, strollers and such in the box of the truck. Which might be fine on some occasions, but not ideal with our Albertan rainy and snowy weather for most of the year. So, it’s nice to know that the stroller and shopping bags can fit into the cab of the F150 truck {another surprise during my test drive}.

Recall how worried I was about driving such a large vehicle as compared to the van I was used to? Well, it really only took me one day to master the art of truck-driving. Albeit, I wasn’t brave enough to fit into any small space like my husband could maneuver {most likely blindfolded too}. Yet, I, with confidence, could drive, park and navigate myself very well. Of course, I have to give a lot of credit to the Reverse Camera System found in the 2011 Ford F150. I was first introduced to this masterpiece of a feature back with my review of the 2011 Ford Explorer Limited. It’s actually one of my favorite aspects of the new Ford vehicles, for safety and reassurance reasons – anyone else have huge car seats which impede proper vision out the back window? With the reverse camera, I really felt like I was certain of was going on around me {or what was coming toward me}! 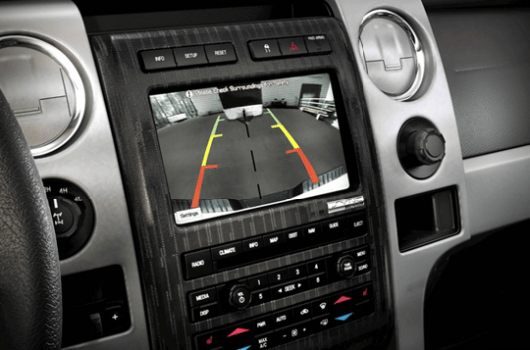 The Reverse Camera System is displayed on a touch-screen on the dash, and has a lot more features than just the camera. It has full GPS capabilities and onetouch features to control the temperature, music and such. This screen offers an easy voice activation, an 8-inch LCD touch screen, single-CD/DVD player with MP3, DVD-Audio and DVD-Video capabilities, a 10-GB music jukebox and SIRIUS® Satellite Radio. Though I won’t get into technical and performance features in this review, I will say having the Standard AdvanceTrac® with RSC® {Roll Stability Control™} on this truck gave me great reassurance. I can’t help but to think of our diverse driving conditions here in Alberta {like mountains of snow, blizzards and rainstorms}, and how great this truck would be to drive in the icy winter months.

And of course – the Platinum features of this truck are worth a huge mention as well. I especially loved the automatic running boards, folding up when the doors are shut and folding down when the doors are opened. That and the adjustable pedals – perfect for those who are shorter and don’t want to sit hugging the steering wheel. It was the most luxurious and smooth riding truck I have been in, to date.

And of course, I was surprised when the I didn’t go through as much fuel as I had thought I would, when driving a truck. It’s always a common thought that truck = gas guzzler. And though I’m still trying to figure out the effectiveness of the EcoBoost Engine, I am surprised that it did get almost the same mileage as my minivan. Seriously.

I didn’t test out the towing capabilities, I’ll leave that and engine specifics to the experts. Yet when it comes to the Ford F150 Platinum vs. my family, it really did impress beyond my expectations. At the end of each test drive of a Ford vehicle, I always wait and see what features I miss the most after having to say goodbye. Today, I am left grumbling each time I have to get into the van and hunch over to get the twins into their carseats. It has been a pain since day 1, and I really REALLY miss just standing next to the Ford F150 and easily buckling them in and quickly going on my way. Having them at arms’ reach, without the back strain is something that I really appreciated during this test drive. As in, miss so much.

Alberta’s winter is approaching and I’m recalling last year when I got stuck almost daily in mounds of snow with my minivan. Plus, our winters last almost 8 months here {blah!}. For the power and safety, the 2011 Ford F150 would actually be a wise family-friendly vehicle. So, when I came into this review thinking that all trucks were just ‘work trucks’, and that they were ‘gas guzzlers’ and would never be practical with a family with 3 children – turns out I couldn’t be more wrong.

My husband, who uses his truck for work purposes and racks on 60,000km per year, always chooses a Ford truck. To him, ‘there no other choice’. So, now that I love driving Ford trucks and have realized that they are family-with-3-kids-friendly, think he’ll start sharing his? 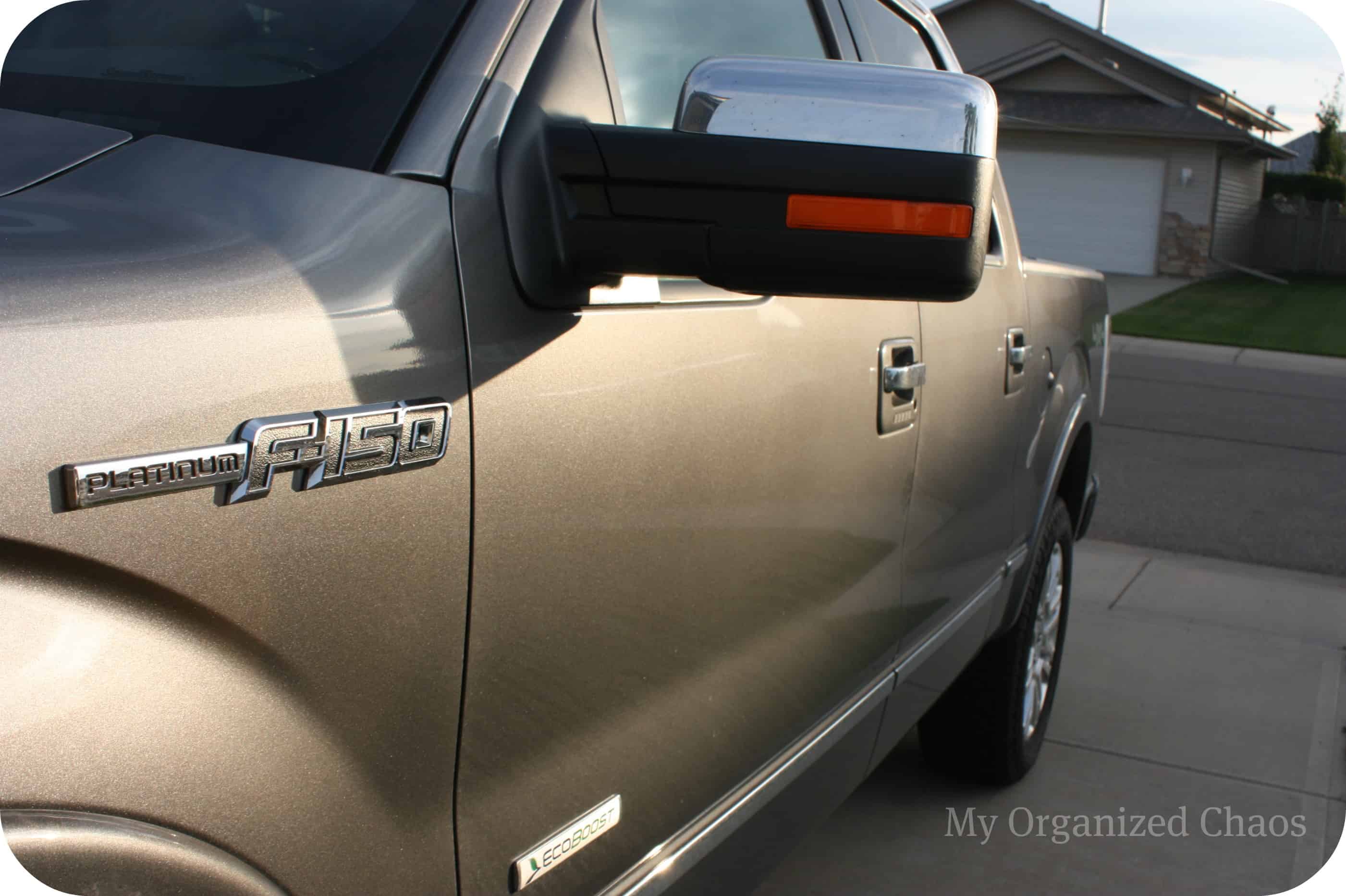